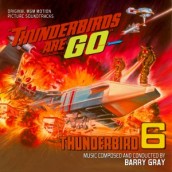 Gerry and Sylvia Anderson’s marionette-centric genre shows like JOE 90 and SUPERCAR might have seemed like charmingly ingenious kids’ stuff in other people’s wire-holding hands. Yet it was the couples’ joyful, uncondescending commitment to their literally wooden characters, and ingeniously designed models that made them truly come to flesh and blood life, especially by filling them with the robustly symphonic scores of Barry Gray. Their imaginations truly took off to become the toast of England, and the TV-watching world with their series THE THUNDERBIRDS, which had the Tracy family and their International Rescue roster of rocketships coming to the near-future’s salvation. With THE THUNDERBIRDS global success, it was only natural that the series would launch into two feature films with 1966s THUNDERBIRDS ARE GO and 1968s THUNDERBIRD 6, with Gray getting the chance to expand on his lavishly played weekly scores to truly fill up the wide screen with a completely fueled orchestral ensemble.

While fans still had to with for THUNDERBIRD 6 to hear Gray’s lightning-charged main titles that promised 60 minutes of throttling action (let it not be said that the Anderson’s “coming attraction” titles weren’t the most excitingly scored of all time), practically every other memorable Thunderbird theme was on hand for these THUNDERBIRDS ARE GO. The presence of Space Probe Zero-X and the arch fiend The Hood make this the most exciting score (and movie) of the two to be presented on this La La Land disc, with Anderson relishing in his brassy, beyond-lush orchestrations. Carrying the same militaristic pride as any British WW2 fighter squadron might have had (especially when accompanying a marching band for the end titles), Gray’s music is the height of patriotic bombast, with snare drums and brass thrumming away for the Tracy team spirit, while romantic strings give pink-colored gloss to the spy friend zone of Lady Penelope. But the score’s most interesting moments belonging to the Thunderbirds trip to Mars to battle stone-spitting serpents, with Gray’s whistling, eerie electronic sustains, whirling sound effects and bell percussion prefiguring his scores for the Andersons’ live action UFO and SPACE: 1999, as does his brass-and-bongo driven action for a rousing orchestra that’s either approximating the rhythms of blast-off or plunging to earth.

Where one could easily assume THUNDERBIRDS ARE GO was written for Spitfire squadron taking on The Jerries given Gray’s straight-ahead, excitingly heroic approach, THUNDERBIRD 6 is more way out in a kid’s movie way. Given the opportunities of a world-travelling Skyship One, Barry jumps into the opportunity of doing a rocket travelogue score, proudly seguing from Middle Eastern to Indian music. Even America gets its dues with some familiar patriotic hymns and native drumming, with ballroom jazz detours along the way. There’s also wincingly goofy, high-hat cartoon music to spare, which might make the ride a little bit less adrenalin-fueled, but no less fun amidst the surfeit of perky musical Mickey Mouse’ing, with some darker brass bits coming when the Airstrip’s hijackers jettison their victims to villainous horn hits. You quite never know what style Barry will rocket to next here, which is part of this score’s ultra-thematic charm, with Barry finding ways to make even the most ethnically disparate music refer back to his iconic Thunderbirds march melody. However, the show’s opening theme does get an exciting workout here for Lady Penelope’s escape via Tiger Moth plane. And what can you say about a composer who can turn “The Flying Trapeze” into score for a crash landing? The pure, ingenious joy that this THUNDERBIRDS feature score fly on might be a bit more kiddie-ish on its second route, but never once does the music betray that you’re listening to a rocket-powered dance of marionettes, its lush, wonderfully melodic symphonic energy showing just how indispensible a member Barry Gray was to The Tracy Family, let alone the Andersons. With the movies now released on Twilight Time blu ray, La La Land makes terrific-sounding use of the “Thunderbirds” sonic elements, with Jeff Bond’s FAB liner notes for a smartly designed booklet making for a nostalgic flashback to the most ambitious music to ever grace what might simply be called puppet shows, and the films to be spun from them.

Click on the link to Purchase the THUNDERBIRDS ARE GO soundtrack