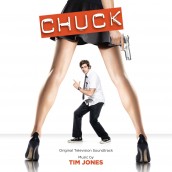 With geeks inheriting the television earth, it was only natural that a computer nerd named CHUCK would get his own cult NBC show, where he proved himself to be a more-than capable super-spy over the course of 91 episodes and five seasons. That’s quite a lot of time to make a musical impression with his ceaseless, CIA-embedded skills. But darn if composer Tim Jones’ brain didn’t stop cooking as he came up with one clever stylistic touch after the other, the best of which have now been collected to create a very strong musical impression on this titular CD. Of course you’re going to get that swaggering, James Bond sound that every satirical agent from Austin Powers to Cody Banks and the Kingsmen can’t do without. And while Jones accomplishes that smooth, jazzily dangerous symphonic fuzz guitar mission with attitude to spare, it’s the electro-jolted sensation of Willams-esque adventure, bang-up percussion and rocking guitars that flood the ear with energized information, the sensation of one idea neatly segueing from the other that makes this album so much fun. You’ve got “Tron”-esque synth organs tango’ing about, cocktail percussion serving another hammering round of percussion as groovy surf chords hang ten. Delightful in whichever stream-of-spy consciousness path its neurons are firing with, “Chuck” has a slam-bang sense of energy that recalls the kind of crazed, yet sophisticated energy that John Powell gave to the likes of AGENT CODY BANKS and MR. AND MRS. SMITH, yet with ultra-homage music that is very much of Jones’ own creation.

But within CHUCK‘s craziness, there’s real honest heart to be had, as Jones shows his thematic talent with piano themes that play a man-child who’s looking for love in all the dangerous places. Sending the album out on a goofy high note are delightfully cheesy Karaoke takes on the kind of retro tracks that are these geek show’s self-referential stock in trade. Needless to say, I don’t think A-Ha, Creedence Clearwater, or Queen will have to worry about Jeffster’s enthusiastically warbled versions of “Take On Me,” “Fortunate Son” or “Fat Bottom Girls.”

Click on the link to Purchase the CHUCK soundtrack