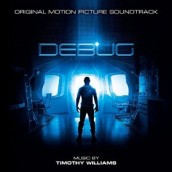 While he’s impressed with the jet-fueled thrills of RED SKY and the massively symphonic historical scope of WALKING WITH THE ENEMY, some of Timothy Williams most blazing work has appeared under the company of Tyler Bates’ GUARDIANS OF THE GALAXY, a score that he also conducted. It’s a sci-fi energy that puts Jones in particularly good solo stead to head into space with a bunch of juvenile delinquent hackers, who discover a particularly devilish mainframe who doesn’t want to be deleted in DEBUG. Though it might not have GUARDIANS‘ budget, filmmaker David Hewlett (most familiar as an actor in the likes of SPLICE) has done an ingeniously resourceful, and clever job in creating the shiny sets, outrageous bursts of gore and unexpected ninja plot twists that bring to mind such late 80s ghost-in-the-machine sci-fi thrillers as NIGHTFLYERS.

While the synth technology has grown a bit since Doug Timm’s exceptional work on that haunted spaceship, Timothy Williams brings a cool, throbbing retro flavor to the combination of electronics and orchestra that thrillingly power DEBUG. It’s often hard to tell where the twisted circuitry and actual instruments trade off, especially given the composer’s novel way of recording the orchestra in “reverse” to fill in this super-elongated craft. Williams uses creepy atmospheres, chopping rhythms and ominous suspense to create a fun musical interface between the HUD-equipped, ill-fated computer kids and future Aquaman Jason Moma’s well-coiffed tormentor, his percussion-heavy music effectively jumping between the real and circuitry worlds.

For as sparkling clean as DEBUG‘s  impressive sets are, Williams gives a nasty, rock and roll grunginess to the score that conveys a punk team spirit facing off against a fiendish circuitry man, also conveying a spirit of sacrifice in his more emotional moments of camaraderie that use unexpectedly poetic piano, voice and melancholy strings to contrast with the more angrily energized music at hand. While even Rocket Raccoon might not be able to survive in this darker musical atmosphere,DEBUG once again shows that Williams is able to suit up for far bigger genre fare, especially when his character-centered score helps give DEBUG electrified, big budget resonance.

Click on the link to Purchase the DEBUG soundtrack