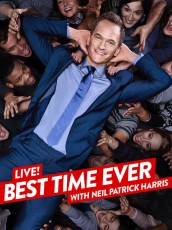 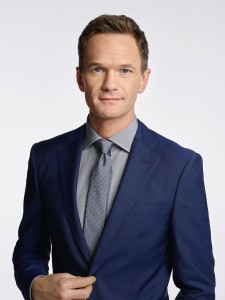 At this point in his career, Neil Patrick Harris is best known for doing virtually everything. His first regular series, DOOGIE HOWSER, M.D., which saw Harris playing an adolescent doctor, ran for four seasons. He just wrapped up nine seasons as womanizing Barney Stinson on HOW I MET YOUR MOTHER and won an Emmy for his guest-star turn on GLEE. On the big screen, Harris played a crazed version of himself in the HAROLD AND KUMAR and in new media, the New Mexico-born actor starred in Joss Whedon’s musical DR. HORRIBLE’S SING-ALONG BLOG. On stage, Harris starred in last year’s Broadway revival of HEDWIG AND THE ANGRY INCH, for which he won the Tony for Lead Actor in a Musical. Then there’s his career as an awards show host – he’s done the Tonys (for which he won an Emmy each time he hosted), the Emmys and the Oscars.

Harris is scheduled to appear in several episodes of AMERICAN HORROR STORY: HOTEL. Right now, Harris is executive-producing producing and starring in BEST TIME EVER WITH NEIL PATRICK HARRIS, a new series premiering on NBC Tuesday, September 15, at 10 PM. It’s live (for the East Coast) and, he tells us, it will be funny. For the rest of what BEST TIME EVER is, we ask Harris.

NEIL PATRICK HARRIS: Not so much like the Tonys, because [with Siobhan Greene] I’m the executive producer on this show, so I’m much more involved in every element of it. It’s kind of like producing seven shows simultaneously, because we have live audience things that are happening, we have pre-taped things that we’re doing that we’re culling that we’ll show later, we have opening sequence stuff, end of the show stuff, comedy that’s in the middle, guest announcers, stunts, so I’m having to compartmentalize my world in a produceorial way that I’ve never had to do before.

AX: Are you enjoying being an executive producer?

HARRIS: I love it. Yeah, it’s great. I’m surprised – I’m surprised at the amount of time it takes to do so much stuff. I guess I shouldn’t be surprised by that, but …

AX: How would you describe BEST TIME EVER? Do you perform in it yourself?

HARRIS: Well, our show’s very much based on the U.K.’s ANT & DEC’S SATURDAY NIGHT TAKEAWAY, so it’s not a variety show. It’s not a lot of performance, it’s not a lot of sketches and bits. It’s more me including the audience and going along on an hour’s worth of ridiculousness and random adventures. So there are celebrities that are surprise guests, there are game-show elements, people that are in the audience have no idea that they’ve actually been set up and that their friends have invited them to the show because we’ve been following them for months. There are people who are watching the show live from home who don’t realize they’ve been set up and they’re at their friend’s house and we’ve boosted their Skype and they’re going to be participating in the show live, and they don’t realize it. So I’m ring-mastering.

AX: Is it like HEDWIG, where you really have to work the crowd a lot?

HARRIS: Well, I hope not. I want an audience to really want to come and participate in the show, because the stage itself is at Kaufman Astoria Studios in Queens, and so that’s its own character within the show. I’ll have a sidekick, I’ll have a guest announcer every week who’s a big, nice A-list celebrity. We’ve got a lot of awesome people [to be guest announcers]. So every week, you’re going to tune in, and it will be different. When you’re in the show, you may win stuff, you may randomly be chosen to be a part of the show. I’m a stickler for the authenticity of it all, so when we say, “Randomly chosen,” we haven’t vetted seven people and chosen one. I really want to make sure that, of the three hundred and fifty people that are there, any one of them will be chosen and they could win. I don’t really care if they’re not the best for television – that’s my job, right? I can control all of that. I want it to feel really real when you’re watching it.

AX: The show is completely live. Do you have any concerns about lack of control over what happens in the moment?

HARRIS: No, I’m not concerned at all, actually. I’m really kind of excited by it. I think TV right now, especially network television, finds itself sometimes in a bit of a rut because of the over-abundance of DVRing and the constant-now binge-watching of amazing shows that you really don’t have to sit down and watch at a specific time. So the fact that our show is live and the fact that you will want to talk about it the next day and you need to see things, you need to actually be watching because, sh**, you may be in the show, that element I think makes it unique to the venue. And it’s a very well-established structure. Ant and Dec have been doing it for twelve seasons in the U.K. They just won two BAFTAs back to back. They’ve been doing it since 2002. So we’re not going out on a limb here to try and reinvent the wheel. This is something that I’m surprised has not been done in the U.S. before and I’m thrilled that for whatever reasons, it hasn’t happened yet and I’m now free to be able to do it. The nice thing about this show is that it’s all fed in bite-sized segments. So I think it’s going to be guest-friendly, I think it’s going to be YouTube-clip-friendly, because there are all kinds of disparate elements to it, and so if you watch something that’s cool, it will trend, hypothetically.

AX: So there could be viral videos of whatever happens on the night?

HARRIS: Oh, here’s hoping. We’re not going to be – well, I guess I shouldn’t say “We’re not going to be,” but there is not a large digital backstage contingency to it, like a late-night talk show would do. I’m trusting that the amount of work that we’re putting on the actual show will have its own legs.

AX: Can you play along with the game show aspect at home, or is it just for the studio audience?

HARRIS: Yeah, there are segments where people at home will be able to play along as well sure.

AX: Do you like playing “yourself,” or is that difficult at all for you?

HARRIS: No, I love it. I’ve been doing this since I was fourteen years old, and I’m much, much older than that. I’m forty-two, so I’ve been doing this for twenty-six years, and I’ve played a lot of different characters, and I got to have almost a decade run of a character that I relished and got to really chomp my teeth into, and simultaneously, I get to host shows as myself, and part of that process is flying by the seat of your pants a lot. When you’re doing a show, you have jokes that you’re doing, but you’re reading the audience, and if they’re not liking your comedy, then you eliminate a joke and you just do a straight feed and you have to look at the clock and see, “Oh, that bit ran long, that speech ran long, we’re suddenly a minute-and-a-half long, so let’s trim that.” So you’re constantly doing it and I think that skill set will work well for this show, because if something’s killing in the first half of the show and we thought it was going to be a four-minute bit and it ended up being a six-minute bit, because it’s live and it’s funny and we want to carry it on, we’ve got to make up those two minutes somewhere. And I’m pretty educated on how to do that now.

This interview was conducted at NBC’s party at Spago in Beverly Hills for the Television Critics Association summer press tour.