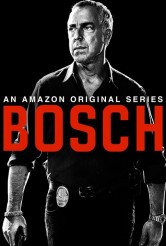 The actress contrasts her LAPD officer and her 24 secret agent 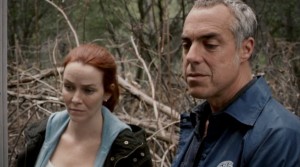 Amazon Studios’ BOSCH, now streaming its ten-episode first season on Amazon Prime, is based on Michael Connelly’s best-selling novels about LAPD homicide detective Harry Bosch, played by Titus Welliver. In the first season, Harry is investigating the recent murder of a pretty woman found in a car, and a cold case regarding the remains of a young boy, which suggests the work of a serial killer.

Annie Wersching plays novice LAPD Officer Julia Brasher. 24 fans know Wersching from her two seasons on 24 as Jack Bauer’s troubled lover, Agent Renee Walker. Among her many credits, the Missouri native also has recurring roles on CASTLE and EXTANT and had a stint on GENERAL HOSPITAL.

Wersching takes some time to talk about playing an inexperience cop thrown into the deep end with BOSCH.

AX: Julia Brasher shows up somewhat late in Connelly’s novel series. What is her relationship with Harry at the point where we meet them on BOSCH?

ANNIE WERSCHING: In the pilot, you see them meet for the very first time. We don’t know each other. You actually get to see the first time they see each other. She’s fresh out of the academy, been on the job three months. Even though she’s older, she’s a rookie, so he’s not quite sure what to make of her, because most rookies are young. She has worldly experiences, even though she hasn’t been a cop for very long, and so there’s an interesting little connection between the two of them.

AX: Were you familiar with the novels?

WERSCHING: I was not. I’d heard of Michael Connelly, obviously, but I haven’t read any of them before. When I was cast, I read two of them and now I’m listening to the audio books of them, just to get a different [aspect]– I wanted to reread them again. They’re really interesting.

AX: Do you know, according to the books, how long Julia Brasher is in the story?

AX: Is she on the dead children case or the dead woman in the car case?

AX: Is that disturbing to you, getting into the character’s head space of what she’s investigating?

WERSCHING: Of course, yeah. It’s funny to separate, because I know what we’ve shot, and then I’ve also read the books. I don’t know exactly where they’re going to go, but of course it’s very disturbing. I have two boys myself, a four-year-old and a ten-month-old, so any sort of child violence is the worst thing you could possibly imagine.

AX: Are you learning anything from this that’s useful in keeping your kids safe?

WERSCHING: Oh, absolutely. I did a lot of training with LAPD, and even just stuff that’s so simple as any time [children] walk up to car, it’s automatic – you look to make sure no one’s hiding. Little weird things like that, that you think, “I’m going to use that.”

AX: You previously went through some training for 24. Is that invaluable for BOSCH?

WERSCHING: It is. My 24 role was a lot better equipped – she was a little more of a badass than Julia. Like I said, Julia Brasher is a rookie, whereas Renee Walker was at the top of her game [laughs], a secret agent. So there’s definitely a difference, but it’s all familiar – gun work is familiar to me. It’s different – it definitely is harder to do stuff in the policewoman blues [uniform]. I was like, “This is hard to move.” With the belt on, I was like, “Wow.” [laughs]  But just for my first couple of weeks of dressing like that. Once you’re in it for awhile, you figure out exactly how to move correctly.

WERSCHING: Oh, God, I love it. Besides the obvious reasons of family and kids – like I said, I have a little baby, so any work in L.A. is the ideal work – but BOSCH is representing sort of the downtown, Hollywood, east side of L.A. a little bit more than the normal L.A. that you see, like Malibu and the beach and everything. I live on the east side, so I like that it’s representing the side of L.A. that I love.

AX: At least in the first episode, there’s a lot of walking up and down hills – is that easy for you, or are people slipping and sliding?

WERSCHING: That was okay. It was dusty up there [laughs].

AX: Given that you also played a tough woman involved in law enforcement on 24, do you often get cast as tough women? If so, is that something you seek out?

WERSCHING: You know what? They’re all different. I would say that this is the first thing I’ve had since 24 that was law enforcement. You take whatever comes to you, and if it’s a character that you connect to and like [all the better[.

AX: How is Titus Welliver to play off of?

WERSCHING: He’s great. Like I said, our characters are just meeting in the pilot, and so we didn’t rehearse much or anything. We didn’t have weeks of rehearsal leading up to shooting or anything, so the genuine newness that Titus and I have together was apparent in Brasher and Bosch.

AX: Have you learned anything working on BOSCH that has surprised you or enlightened you?

WERSCHING: I feel like you learn a little bit every time you get into a new character. You’re in a different head space than you’ve been in than any other person that you’re playing, so I always enjoy learning something that you learn from another person. And I learned some really cool, specific stuff from the LAPD that I really liked that I didn’t know about cops, just like when you get into the car, you kick it and it shuts, so you don’t have to lean over with all your belt stuff on. I love little stuff like that to help make it look more authentic.

WERSCHING: It actually is, so far. I wasn’t quite sure exactly what we would be finding, but so far, it’s been completely up to par with any of the network stuff I’ve done. It’s exciting to me, the newness of it.

This interview was conducted at Amazon Studios’ portion of the Television Critics Association press tour at the Beverly Hilton Hotel.