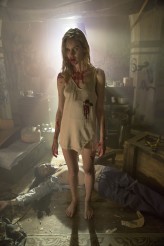 Adam Davidson, director/co-exec producer, gives the scoop on what to expect 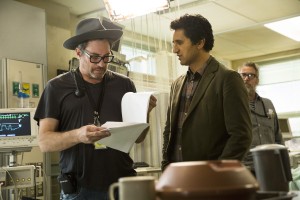 In Part 2 of our exclusive interview with AMC’s FEAR THE WALKING DEAD director/co-executive producer Adam Davidson, he talks about scares, subtext and more.

AX: How often do you actually want to go for a hard scare where there’s a visual shock, versus something that’s scary but presented mundanely, like a zombie seen at a distance?

ADAM DAVIDSON: There isn’t any mathematical equation, it really comes down to storytelling. [There’s a scene in the pilot in the high school] that wasn’t intended as a scare moment, but when we staged the scene and I started shooting, I was like, “This is a cheap set-up to have a little fun with this moment, because there is this tension, this pervasive anxiety, that exists.”

AX: There’s a clip that was shown where there’s scratching at the door and something comes in and that’s scary, but it turns out to be the dog. And then a character opens the window, and there’s a zombie, but the zombie is far away enough that it’s not going to knock through the window and kill him. I don’t mean this literally, but is there ever a shot where somebody’s going to open a window and a zombie’s face will be right there?

DAVIDSON: I have three daughters and I love them all equally and I’d say that’s similar to how I feel about directing. I love storytelling and every scene is an opportunity to find a moment of truth and a way to tell the story that feels organic and grounded, yet can be entertaining. And so I think always, I’m looking for the balance. So when I have an action sequence, which I love doing, like that whole first sequence in the pilot, there’s one line of dialogue. It’s all shots and beats with the actors. That was great to put together and fun and exciting to put together. But then I love the scenes between two people. I love exploring the depths of a scene and peeling back the onion and working with actors. That’s one of the joys for me.

AX: Are there particular technical challenges with this material? Unless you’re shooting in super-bright sunlight, it seems like when somebody is badly mauled or dead or walking dead, you would need to light them in specific ways so you can see the wounds in not-great light.

DAVIDSON: No, and one of the things that we wanted to do was, because the nightmare becomes real, was show these infected in daylight. Obviously, in the church sequence and in the tunnel, you get to play with light and darkness and having these creatures emerge, but at the same time, we need them to exist at all times of day, so yeah, that is correct.

I think the biggest challenge technically comes from the fact that we wanted this to feel real and grounded. So just the way you and I are speaking right now, the idea was like, if you and I are in a scene right now, at this moment, all of a sudden, in comes a walker, a zombie. As opposed to doing it as a horror movie, where we’d be sitting here in shafts of light, it would be dark and lighting going and, uh-oh, what’s coming, we wanted this to feel like it could happen right now. And because we were going for that kind of truth, you can’t hide behind the genre tropes. You have to be bold with your portrayals and make everything feel really real and really grounded.

AX: Because these are walking zombies versus running zombies, is there ever a question as to how this situation gets so out of hand? Because it seems like maybe because they are relatively slow-moving, and at the beginning, there aren’t swarms of them, it seems like if people could figure out what was happening and just get onto a rooftop with rifles …

DAVIDSON: There’s a quote, I believe it’s in the trailer, where the Tobias character [played by Lincoln A. Castellanos] says, “What people don’t understand is that when civilization ends, it ends quickly.” And I think the idea is that, because of the nature of this virus, it spreads before anybody can really cope with it. People are coping with it and dealing with it, but it’s faster than they are.

AX: A lot of your series regulars are younger actors. How is it working with teens and young adults?

DAVIDSON: It’s just been a dream. They’re all very special, talented people. They’re different people, different individuals. Every actor works in a different way and I feel like that’s part of my job, is adapting and learning how to work with each one. So age doesn’t really make a difference, it’s all about finding a way to get to the truth of the scene and the moment.

AX: The cast is largely Latino. Is that explored at all in the story, or is that just taken as a given, and it goes without discussion?

DAVIDSON: It’s kind of taken as a given. And in fact, some of the cast weren’t originally intended as Latino, they just were the best people for the part, just like with Cliff Curtis [who plays Travis]. We made the character Maori [like Curtis], because he was the right person for the role.

AX: Had you worked with and of your FEAR THE WALKING DEAD crew before this?

DAVIDSON: I did a pilot called KINGDOM last year that got picked up for two seasons as well, for DirecTV, it’s about MMA fighters. I brought in our production designer Nacho, who I’d also worked with on DEADWOOD, and Jonathan Stinani and Maria Caso, because we wanted this to be a gritty world, and she knows how to get that without making it feel staged – it just feels real, it feels lived-in. And then I brought in an editor that I had worked with. The d.p. [Michael McDonough] was somebody that I had not worked with, but I admired his work and we had a great conversation, he really understood the material and I was intrigued because, having grown up in L.A., wanting to tell the story of L.A., I thought it would be interesting to bring in a foreigner [McDonough is from Scotland], so we could both draw out of each other what L.A. is to us. And the other thing is, he did this movie, WINTER’S BONE, which not only was shot very quickly, for no money, but I felt he evoked a world that had an eeriness to it, yet was real and grounded.

AX: Do you think the walking dead are a metaphor for anything in particular, or is a matter of, it bring your own subtext?

DAVIDSON: Definitely bring your own subtext. I hear people get asked a lot, “Why do you think zombies are popular?” and I’ve heard everything from people saying that, “Well, if there are no real Nazis any more, we need something to kill for entertainment,” and I’ve heard people talk about the whole fascination with, “Can we come back to life, even though we’re not really coming back to life?” I think for me what is intriguing is the idea of what makes us human and how do we define our humanity? But also, I think that what intrigues us is the idea that the world could change and how would we survive and that those of us who are weak could suddenly become strong, because we’re capable of handling this situation in better ways than people who are now maybe kind of sitting above us, thumbing their noses at us because they are privileged with money or whatever. All bets are off when the apocalypse happens, and I think that’s intriguing to people. Can we reinvent ourselves?

DAVIDSON: I have two projects that I’m developing now, one with Barry Josephson and one with Michael Shamberg and I’m very excited about both as potential cable shows. One involves the CIA and its testing of LSD in the 1950s and the other has to do with the Amazon.

AX: What would you most like people to know about FEAR THE WALKING DEAD?

This interview was conducted during AMC’s portion of the Television Critics Association press tour at the Beverly Hilton Hotel.