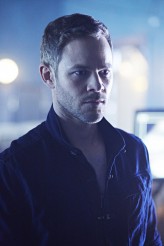 The actor talks playing a bounty hunter in outer space 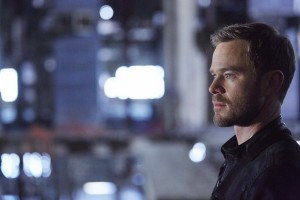 In Syfy Channel’s KILLJOYS, Fridays at 9 PM, Aaron Ashmore plays John Jaqobis, a good-natured bounty hunter who works with his brother D’Avin (Luke Macfarlane) and their friend Dutch (Hannah John-Kamen) as they track down criminals in the Quad planetary system.

Ashmore, a native Canadian whose identical twin brother Shawn is also an actor, has worked a lot in both sci-fi and on Syfy. He was previously a series regular on WAREHOUSE 13 and played Jimmy Olsen on SMALLVILLE, as well arcs on LOST GIRL and XIII: THE SERIES. Non-genre gigs include IN PLAIN SIGHT, VERONICA MARS and THE WEST WING.

At an event held by NBC/Universal for the press, Ashmore talks about both KILLJOYS and science fiction in general.

AX: Is science fiction a genre you particularly like, or is this just where the work is?

AARON ASHMORE: Well, there is a lot of sci-fi stuff being produced, so obviously, there’s a lot of work, but I was just saying to somebody that I did a pilot for a cop show set in Philadelphia, and I was like, this is cool, this is different, but it gets a little boring when you’ve done sci-fi, because [in sci-fi] the world is so much bigger, and we also do all the drama and all that, but we also get to create or live in a completely different world, so as an actor, it’s playing to more fun. We’re pretending anyway, so why not pretend in an amazing world?

AX: In the SMALLVILLE and WAREHOUSE 13 and now KILLJOYS, you play the calmer, more mellow member of the team. Is that how you are in real life, or is that just how people cast you?

ASHMORE: I can be diplomatic in situations, so I think I try and calm things down, but I think this character and also in real life, if push comes to shove, I’m ready to go, but yes, I would rather talk things out before pulling the gun out.

AX: Is pulling the gun out and the various bounty hunter action stuff you already knew how to do, or did you have to be trained on anything?

ASHMORE: Yeah, we’re shooting up in Toronto, and we worked with a guy who used to be was part of the Canadian Army, retired, and so he walked us through basic firearms, different weapons, handguns versus rifles, so they prep you for all that stuff. They don’t want you to look like an idiot out there, so they make sure you look like you know what you’re doing.

AX: How are you enjoying playing the brotherly dynamic with Luke Macfarlane?

ASHMORE: It’s great. Luke is an awesome actor and a really, really nice guy. There’s definitely some animosity in that [onscreen] relationship, some friction, but I think that makes for interesting characters and I think realistic, too. A lot of families have a little drama, and we’re no different.

AX: Is there a science-fiction element – the spaceship or a particular type of gun – that you particularly like?

ASHMORE: Yeah. The fourth member of the Killjoys is Lucy, our spaceship [voiced by Tamsen McDonough]. She’s artificial intelligence, so she talks and she helps us out a lot in our missions, and I get a chance to fly the spaceship most of the time, that’s sort of my responsibility, so I would definitely say that Lucy, our ship, is my favorite tech that we get to work with.

AX: Did anybody show you how to fly a spaceship, or did you invent how your character does it?

ASHMORE: Well, the cockpit was there, and there are some things that looked like control panels and all that stuff, so I just winged it. And apparently it worked. Nobody told me otherwise.

AX: Were you a big fan of STAR TREK pilot Mr. Chekov growing up?

ASHMORE: Absolutely, one of my faves [laughs].

ASHMORE: Yeah. I’ve got a film called REGRESSION starring Ethan Hawke and Emma Watson. I don’t know if there’s a release date, but I think it’s coming out this summer and it’s a psychological thriller.

AX: And what would you most like people to know about KILLJOYS right now?