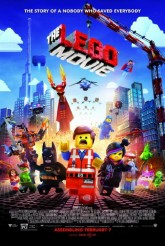 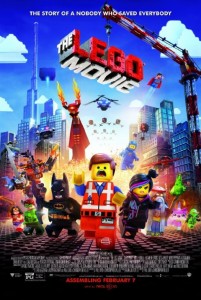 THE LEGO MOVIE, which takes a host of Lego figures, vehicles, structures and environments and deposits them in a story in 3D animation, has some very good jokes. It also has a message that gets repeated in various forms throughout the film. Depending on how one takes the message, viewers may variously think, “This is deep,” “This is shallow,” or “Do the filmmakers actually know what it is they’re saying?” By the end, directors/writers Phil Lord & Christopher Miller, working from a story they crafted along with Dan Hageman & Kevin Hageman, have tried to have things so many different ways that THE LEGO MOVIE philosophically breaks apart due to unbalanced construction.

In a prologue, we meet the Lego mage Vitruvius (voiced by Morgan Freeman), a prophecy-proclaiming Gandalf type who stands in opposition to power-hungry Lord Business (Will Ferrell). Eight-and-a-half years later, Lord Business is now President Business, who has succeeded in imposing conformity on all the various realms of Legoland. Most of the inhabitants are happy non-thinkers who believe (to quote their favorite song) “Everything is awesome.” Lego construction worker Emmet (voiced by Chris Pratt) is completely content, albeit a bit lonely, until he literally stumbles on the Piece of Resistance, which legend has it can stop Business’ all-powerful weapon the Kragle. Finding the Piece means that Emmet is the Special, the most important and interesting person in the world.

As Emmet tries to work out how he can possibly be the Special, he is drawn into much adventure and danger by WyldStyle (voiced by Elizabeth Banks), a disciple of Vitruvius who is a mixture of ninja, race car driver and general heroine. Batman (voiced by Will Arnett) is also on hand, and a variety of D.C. superheroes and other entities show up for stints ranging from cameos to supporting cast.

While there is a lot of simply crazy humor – arguably, the best joke in the movie is a place name, with Batman’s attempt at songwriting and the STAR WARS gags pretty funny as well – there is also a very great deal of consideration as to whether Emmet is actually special or not. Here is where THE LEGO MOVIE starts to make our brain hurt. The film insists that extremely mundane people are talented, too. Fair enough. However, it then goes on to suggest that people who have any exceptional abilities should essentially shut up about what they can do and all collaborate, with nobody ever getting to have their vision realized or even commended. The proof here is that WyldStyle, who actually is heroic, is neither hailed for her actions nor seems to have any sense of self-worth aside from her value as a girlfriend or a follower. The movie is so intent on getting Emmet to finally show that he’s special that it downplays the unique contributions of everyone else. We can’t tell if the film is actually suggesting that the ordinary should be celebrated at the expense of the extraordinary, or if the filmmakers are just really bad at saying something else. Yes, it’s good for kids to share toys – like Legos – but this is maybe not the best metaphor for how to deal fairly with creativity vs. mundanity.

As if this weren’t problematic enough, late in the day, the film decides to assault its fourth wall. To avoid being spoilerific, details will not be shared here, but the upshot is an even more muddled outlook, so that we’re not sure what to take seriously. Suffice to say that not every family film requires a literal family lesson, especially when it’s shoehorned in during the last reel.

Finally, despite the fact that everything looks like Lego toys, there is a lot of death and destruction here, which may be disturbing for the young target audience, though older viewers may be amused by concept and execution.

In the voice cast, Freeman seems to be having a good time sending up his serious know-it-alls of yore and Liam Neeson is a standout as the ever-angry Bad Cop and his flip side, the cheery Good Cop.

THE LEGO MOVIE has its moments – and makes better use of 3D than many of its peers – but it is also one of those movies where a lot of people are less likely to come out of the theatre wanting to debate its merits than exactly where and how it goes wrong. Because all of its characters, sets, props and everything else are pre-existing toys, it also plays as a very long commercial, something else parents may wish to consider.