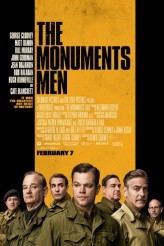 Can artwork be worth more than a life? 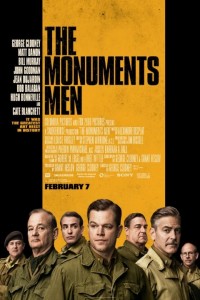 THE MONUMENTS MEN, directed by George Clooney and scripted by Clooney and Grant Heslov from a book by Robert M. Edsel with Bret Witter, concerns a true, little-known chapter of World War II – and world art – history. Concerned by Hitler’s propensity for not just killing people but stealing their artwork collections, a small group of curators, art historians and the like were commissioned by the U.S. military to go into Europe, find and retrieve the artwork, all while the war was still raging.

Since what’s happening is a huge treasure hunt, THE MONUMENTS MEN could have been anything. Clooney and Heslov don’t have a laugh riot sensibility, so the movie isn’t a straight-out comedy about middle-aged and largely sedentary men suddenly on the front lines, but it’s not a linear thriller, either, nor is it a deep character study. The filmmakers are very interested in the issue of whether it is worth risking and even losing life in the service of saving art. Their answer is sincerely in the affirmative, and intellectually, we understand the argument they make, mostly through Stokes. The problem is that for a lot of people, it won’t resonate on a visceral level. The notion that art is central to Western civilization makes sense, but so does one outraged officer’s speech that he’s not prepared to write to a soldier’s mother saying her boy died to save a mural on a bell tower. Clooney and his director of photography Phedon Papamichael shoot the paintings and sculptures lovingly, but they don’t make us share the passion that the main characters feel for these masterpieces. What the film does, and does well, is persuade us that its people feel it’s worth giving their lives to protect the artwork.

The structure of THE MONUMENTS MEN is perhaps more episodic than intended. We understand how our heroes draw their conclusions, but not always how one discovery leads to another; sometimes there’s less payoff for a story thread than the buildup would suggest. Rather than building tension along a linear plot, this film is more interested in character moments.

To this end, the often scared Garfield and the much calmer Clermont are often paired together, and Goodman and Dujardin (who previously worked together in THE ARTIST) make a good unlikely buddy act. Campbell and Savitz are also teamed, much to Savitz’s annoyance. Murray and Balaban zing off other another so expertly and effortlessly that the only problem here is there is perhaps more an undertone of joy and affection than we’re supposed to see. Bonneville is affecting as the character who has the most to prove, while Clooney and Damon both offer conviction as men who inherently inspire trust.

It’s certainly enjoyable seeing this great group of actors – along with Cate Blanchett, who plays an extremely knowledgeable French secretary – get to work with each other, given time to build moments and reactions, albeit the film’s insistent score sometimes overwhelms the action. It just feels a little strange juxtaposed with the Holocaust and, because of the way the story is told, the characters feel more sense of urgency about their mission than we do. They want to get the Rembrandts and Michelangelos back to their rightful owners and exhibits; many viewers will just want the men to get home safely.