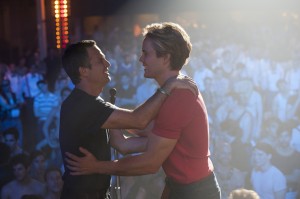 This is a great week and a half for Taylor Kitsch. The actor, originally from British Columbia, Canada, shot to fame as high school football player Tim Riggins in five seasons of the series FRIDAY NIGHT LIGHTS and subsequently starred in the big-screen features JOHN CARTER, BATTLESHIP and SAVAGES.

Sunday, May 25, Kitsch can be seen on HBO in the premiere of director Ryan Murphy’s film version of Larry Kramer’s play THE NORMAL HEART; Kitsch stars as Bruce Niles, a gay man coping with the AIDS crisis in 1981, when the disease had barely been identified and was being actively ignored by the government; the cast also includes Mark Ruffalo, Julia Roberts, Matt Bomer, Jim Parsons and Jonathan Groff. On May 30, THE GRAND SEDUCTION opens in theatres; Kitsch stars as a big-city doctor lured by locals to a small island village in need of his services in the comedy, which also has Brendan Gleeson as a lead. On June 3, LONE SURVIVOR comes out on home video and Movies on Demand; Kitsch plays real-life Navy SEAL Michael Murphy in the action drama that won a Screen Actors Guild Award for its stunt team after its theatrical release last year.

Kitsch is present at a Q&A panel held by HBO for THE NORMAL HEART. Afterward, he makes himself available for further discussion.

ASSIGNMENT X: Can you contrast the physical and emotional demands of doing THE NORMAL HEART and LONE SURVIVOR?

TAYLOR KITSCH: Ironically, they’re pretty similar in the sense of, I gained twenty pounds for LONE, lost twenty-five for this. And then the emotional toll – Murphy is arguably one of the most renowned Navy SEALS of all time, and I’m very close to [his] family, and to do that justice and to do Bruce Niles justice as well is something that you take to heart and you don’t take for granted, so it’s an honor to play and breathe life into these guys. I mean, this is why you become a storyteller, to do these kinds of roles. So this [NORMAL HEART] is a once in a lifetime gig. It really is, with this cast.

ASSIGNMENT X: You were actually born right around the time that THE NORMAL HEART takes place. What do you think it has to say to people who may not have been alive, or at least old enough to understand, what was happening during that period?

KITSCH: I don’t have one message. I think it grounds you, I think it makes you take a beat, and [Ryan Murphy] said it so well – there’s a generation standing on these guys’ shoulders right now. Not just gays and lesbians, but human rights. I do a lot of work in Africa with the African Children’s Choir. You see it every day there. And I think this will expose it and educate a generation. And hopefully more to come. And I think that’s a huge, pretty incredible thing to be a part of. And I play a guy that’s incredibly successful individually, in the closet, the president of the Gay Men’s Health Crisis – I mean, there are guys that are in the closet now, leading these double lives, in the work world and successful. And maybe this guy will shed a light on, there is an opportunity to come out.

AX: What does the African Choir do? Who does it help?

KITSCH: The African Children’s Choir [takes] kids from war-torn areas, villages and slums, and houses them, schools them, feeds them, creates a choir within that group that travels the world and raises money for their own cause. So it pays for university, it pays for food, and they also basically aid the families. Which is a huge part of it. They don’t segregate the kids from the families. They really make them part of it.

AX: In THE NORMAL HEART, you have your first romantic screen kiss with a man. Did you have to gear up for that, or was that just like doing a love scene with anybody you didn’t know well beforehand?

KITSCH: Totally. You know what’s funny? I didn’t think too much about it, and I have to say, [Jonathan] Groff is such a big, sweet guy that it wasn’t even an ordeal. It really wasn’t. And if you guys know me, I just go for it. And it wasn’t like, “Oh, my God, this is on my calendar, I’ve got to kiss …” Groff is amazing and we had more fun with it, and I think it the beginning of the film, especially with Bruce, when he’s at Fire Island, he can be Bruce. And that’s the highest this guy can be. He doesn’t have to live a double life. And that’s a beautiful thing, when you see him as happy as he is.

AX: Can you talk about working with Ryan Murphy?

KITSCH: I trust him immensely, and obviously, with a risk like this, it was a leap of faith on both ends. And I think that has made that bond that we have today even stronger. I think he’s incredibly strong to take this on the way he did. He’s all in and I love that about him.

AX: Have the two of you discussed working together on future projects?

KITSCH: We have talked about a couple things and we’ll see where it goes.

KITSCH: You don’t want me to sing [laughs]. Let’s just put that to bed. It’s things that he’s bouncing off me, that he’s like, “Hey, would you be interested in X?” or “I might develop this.” It’s incredibly flattering that he has me in mind, especially after working with him already.

AX: You have an athletic background. Has that helped you at all in your acting career, especially in terms of self-discipline?

KITSCH: It’s a huge part. I would say so much of it is just work ethic to where I’ve gotten – I’m just literally out-working people. And people see it, that you want to work with, and you have to prove yourself over and over, and it’s more than okay when it’s these kinds of things that you get to be a part of.

AX: Now that you’ve been acting professionally for eight years, are there things you know now that you wished you knew when you were starting out?

KITSCH: I haven’t really changed my process. I’d love to think I prep more than anyone. I take it incredibly seriously. Maybe take a beat and enjoy it a bit more than being so hard on myself. That could be a good lesson.

AX: How do you choose your roles nowadays?

KITSCH: Riggins is a pretty complicated guy, and I like to think that a lot of these guys that I’ve been able to play have multiple layers, from Bruce Niles to all these guys, from John Carter to of course Murphy. So that is first and foremost, who these guys really are, and then what comes with it.

AX: Some journalists have held up Riggins as a sex symbol …

KITSCH: You guys like to paint that picture, I think, more than I’ll embrace it. I’m not going to complain, but at the same time, [Riggins] is a seventeen-year-old alcoholic with no father. That’s what I see. But it’s very flattering.

KITSCH: I wrote and directed a little thing [the short film THE PIECES] that we just got five million bucks to make [as a feature]. I think it’s worth watching, and so I wrote about it, and we did a thirty-minute short about it, and it came out well.

AX: Who worked on it with you?

KITSCH: Just me and my team, a couple of friends of mine, more or less. It’s been great.

AX: Have you been back to Texas since finishing FRIDAY NIGHT LIGHTS?

KITSCH: I still live in Austin [where the series was made]. I fell in love with it. I don’t have to be in L.A., which is great. I lived in New York,L.A., and then Austin just felt right.

AX: What are you most passionate about?

KITSCH: I love what I do. I’m incredibly passionate. I get so much fulfillment out of what I’m doing that I just feel incredibly fortunate. Hopefully I’m going to go back to Africa and work with the African Children’s Choir again. I’ve worked with these guys the last six years and it’s changed my life. And to expose that in the right light – I think it’s just grounding and, selfishly, I get so much out of it. And to be in this situation and to have a say and to be able to expose certain things is a pretty great thing, and it shouldn’t be messed with.

AX: Is there anything else you’d like to say about THE NORMAL HEART right now?

KITSCH: There’s a lot. It’s hard, because, one, you have so many amazing characters. I watched it last night and I’m still reeling from it. It’s rare that everyone just came together the way we did, just because we’re dealing with something bigger than us. Obviously, it’s a true story and you’re breathing life into these guys that have lived, and some are still alive, but where do you want to start? It’s a story about love, and love lost, and a big thing for me of who Bruce was is the fear of not knowing, of having AIDS and not understanding it and being scared to even come to terms with that and it’s just, in my opinion, really beautifully done.