Interview: SHERLOCK co-creator Steven Moffat is on the case for Season 3

The co-creator/producer talks how long the series may run 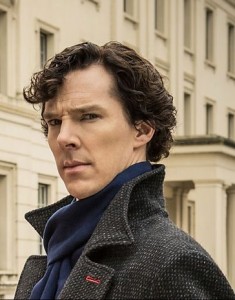 SHERLOCK is back on the case in his third season on PBS, Sunday at 10 PM, albeit too briefly for most fans – this Sunday’s episode, the third of the current series, is also the season finale. With Benedict Cumberbatch as the famous detective who faked his own death at the end of last season and Martin Freeman as the often irate but loyal and smart Dr. John Watson, series creators Steven Moffat and Mark Gatiss’ present-day take on Sir Arthur Conan Doyle’s London sleuth has its viewers begging for more.

Moffat is in attendance for a Q&A held by PBS for the Television Critics Association. After the panel, the writer/producer – who is also current at the helm of the BBC’s DOCTOR WHO – sticks around for a few additional questions.

ASSIGNMENT X: Would you say that your Sherlock goes through more changes than he did in the original Arthur Conan Doyle stories?

STEVEN MOFFAT: You do see in the original stories and it is commented on in the original stories, that Sherlock Holmes in the middle and at the end is very different from the man we first meet, as Dr. Watson gets to know him better. So these things are there. We wouldn’t really impose that – I’m not a big fan of psychoanalyzing a character or trying to bring them up to date and make them even madder than they were in the first place. We stick pretty close to what Doyle laid down, because that really works, where every time they’ve tried to improve Sherlock Holmes, they’ve made it worse. So we stay pretty close to what it is.

AX: The women in SHERLOCK tend to be a lot more interesting than the women in Conan Doyle’s original stories, especially Watson’s fiancée/wife Mary Morstan, played by Amanda Abington …

MOFFAT: Well, it’s one of the difficulties of Sherlock Holmes, the original stories, is that what women there are aren’t that interesting. Mary’s not bad, I think, on first appearance. She’s a little bit flat, but she is at least resourceful and clever. Quite often, they’re slightly dull in the original, if I’m honest, and it works for our show to bring a female perspective onto the two boys, really. It’s always about them. It’s always about the two boys – it always will be, because that’s the nature of the show. We can’t change it, I think we’d be wrong to change it. And I think to bring a female perspective on it, I think it enriches it and it’s part of modernizing it.

AX: As a writer, do you ever have trouble coming up with cases worthy of Sherlock?

MOFFAT: Well, not so far, but we’ve only done nine. But no, not really. I mean, it’s not so much the case worthy of Sherlock as, what’s the story going to be? What’s it going to do to them? What journey do they go on? Because they’re ninety-minute films. We’re not doing sixty-minute episodes where you could have smaller, minor-key stories. Really, with SHERLOCK, we’re pretty much committed to having big stories that affect their lives. The nearest we can do is to create – like the wedding episode, in which little cases are inserted. Those little cases are the closest we get to being like Doyle in a way, because they’re little miniature stories. They tend to be short, the Sherlock Holmes stories.

AX: How many seasons of SHERLOCK do you think you’d like to do?

MOFFAT: Oh, well, you never know that in advance. If we weren’t enjoying it, or we didn’t think there was anything good left to do, we’d stop, but we haven’t reached that point yet, is all we can say. I can envision just doing it for a while – for quite a while, possibly. The fact that we only do it occasionally means it’s not swamping anyone’s schedule. Eventually, I’ll stop doing DOCTOR WHO, because it stops me doing anything else. But SHERLOCK doesn’t swamp my schedule, doesn’t swamp anyone. So I could imagine we’ll come back and do SHERLOCK fairly often for many years, rather than very often for a few years.