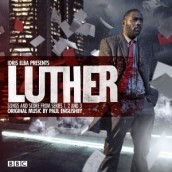 Silva Screen seemingly has a lock when it comes to the BBC with it TV collections of Time Lords and all of God’s documentary creatures. But when it comes to take-no-prisoners charisma, Detective Chief Inspector John LUTHER has been the charm, not only in the gripping hands of Idris Elba, but its soundtrack that mixes eclectic tune choices with powerful underscore suspense, both suspects at last rounded up here for a terrifically assembled compilation of the songs and score that helped Luther track down serial killers and robbers across three seasons.

So far, the biggest exposure that American audiences have had to Paul Englishby’s work has been through his tender, dramatic scores on MISS PETTIGREW LIVES FOR A DAY and AN EDUCATION, which makes his often ferocious music here particularly dynamic. Not only does Englishby have the sound of TV crime drama down with gnarled percussion and tense strings, but LUTHER digs deep into an honorable cop who’s seen, and been unjustifiably accused of way too much villainy. Beautifully mournful female vocalese accompanies an elegiac guitar, while an equally solemn Duduk leads the percussive suspense. Englishby shows equal talent at stripping emotion down to a piano, violin and a guitar, before orchestra and sampled menace once again rear their menacing heads. It’s scoring that resonates with a feeling of tragedy that inseparably links Luther to the innocents he desperately tries to save, music for a heroic conscience that’s had to sink to the depths of human nature – a darkness that Englishby’s haunting, aggressive tone almost makes irresistible.

LUTHERis one of the very rare song-score albums whose tunes will hold just as much interest for those picking this up for Englishby’s instrumentals, showing off a constantly surprising variety that makes imaging what comes next on the CD as much fun as playing guessing games for the suspects’ criminal motives. Starting off with Massive Attack’s noir-ish jazz beat of “Paradise Circus” that serves as the show’s theme, “Luther’s mix tape coolly swings all over the place, from the Hendrix-like guitar rock of The Heavy’s “Big Bad Wolf, Gil Scott-Heron’s trance-hop for “Me and the Devil,” Robert Plant’s southern-style “Satan Your Kingdom Must Come Down,” Emiliana Torrini’s hauntingly echoing “Gun,” and Marilyn Manson’s screechingly horrific vocals that make for anything but “Sweet Dreams.” However, the most beautifully tortured, and lush tune here that speaks for Luther’s screwed-up mind belongs to Nina Simone’s elegant slow burn of “Don’t Let Me Be Misunderstood.” It all adds up to a dangerously sleek listen for a violence-plagued detective.