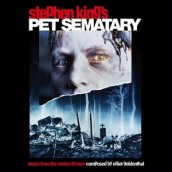 There are certain horror films and soundtracks that transgress barriers by blending art and shock, a la PSCYHO and THE EXORCIST. Then there are some that just plain old scare the shit out of us with the yuck factor of seeing a sweet near-toddler rip the throat out of Fred Gwynne to the accompaniment of children’s lullabye voices. Such is the unnerving, brilliantly distasteful power of Mary Lambert’s PET SEMATARY and the dawning of a composer who’d re-write the book on experimental scoring in Hollywood for Stephen King’s most unnervingly sadistic film adaptation, with a screenplay by King himself no less.

Elliot Goldenthal was a student of modern classist John Corigliano (ALTERED STATES) and an up and comer in New York’s art music scene with only two punk indie scores under his belt. But then 1989 marked a breakthrough soundtrack year with between the hallucinogenic DRUGSTORE COWBOY and the more musically “mainstream PET SEMATARY. At first SEMATARY‘s combination of synth and real strings seem about par for the course for the era’s cool, if lower rung horror scores. But then, you quickly become aware that this isn’t going to be just another low-budgeter that creeps about on good will, as the truly frightening brilliance of Goldenthal’s mind reveals itself through those chillingly innocent lullabye voices, weird metallic samples and tinkertoy percussion. There’s just something completely off about PET SEMATARY‘s score that makes reality itself seem confused, and all the more terrifying. But what’s even more stunning about the CD that finally puts Goldenthal’s complete score in the Indian burial ground is the humanity that comes out thought it, a gentle solo piano and poignant orchestra conveying two parent’s shattered grief at a child’s loss. Goldenthal’s score steadily slides into absolute, piano-pounding string-stabbing madness as does a father’s truly terrible idea at resurrection, creating a synthesis of tragedy and terror that can now fully stand as one of the 80s great horror scores. It’s not just hearing great horror music, but Goldenthal’s exhilarating shock of the new, with the ground-breakingly impressionistic scores like ALIEN 3 and INTERVIEW WITH A VAMPIRE just waiting to rear their heads.

With 50 minutes of score and nearly 15 minutes of alternate tracks slamming home the creep factor with funereal organ music, PET SEMATARY can now proudly stand as one of the great genre scoring “firsts” with the exceptional mastering, and assembly that truly brings out the score’s chilling power. John Takis’ incisive liner notes get to the roots of Goldenthal’s madness with the composer himself in this graphically impressive booklet by Warm Butter Design. Sure, sometimes dead is better, but we can be thankful that the rapidly growing embryo of Elliot Goldenthal’s startling style has now been dug up in full.

Clink on the link to Purchase the PET SEMATARY soundtrack