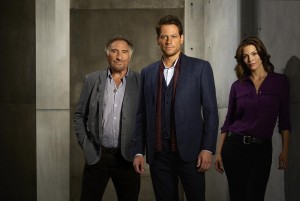 In ABC’s freshman series FOREVER, Tuesdays at 10 PM, Ioan Gruffudd plays Dr. Henry Morgan, a medical examiner attached to the NYPD who sometimes seems similarities to older cases – because Henry is actually 250 years old. He can be killed, but always resurrects nearby, naked and in water; he’s spent his existence trying to figure out why. Having had his heart broken repeatedly by outliving the women he loves, Henry is reluctantly drawn to the NYPD homicide detective (Alana de la Garza) he works with; he’s also worried about the health of his long-ago adopted son (Judd Hirsch), who is aging while Henry remains forever youthful.

FOREVER creator/executive producer Matthew Miller, an alumnus of the CHUCK writing/producing staff who also created the series GROWN UPS and developed 666 PARK AVENUE for television, participates in a FOREVER panel arranged by ABC for the Television Critics Association. Afterwards, he engages in a one on one follow-up discussion.

Of FOREVER’s origins, Miller tells the panel, “I guess the real story was it was pilot season, and I was putting my five-year-old son to bed, and he asked me, ‘Daddy, are you ever going to die?’, as kids do. And so I said, ‘No, of course I’ll never die,’ because I didn’t want to upset him. And then I realized you’re supposed to build trust through honesty with children. So I said, ‘Okay. I will die someday, but it won’t be for a very long time, and by then, you’ll probably want me to be dead.’ At which point, he burst into tears, and my wife ran into the room. I was kicked out of the room, and she continued raising my child, and I went off to write television.”

This gets a laugh. Miller continues. “That was the impetus for the idea, and then from that I extrapolated, and I said, ‘Well, okay. So what if a character wouldn’t or couldn’t die,’ and all the great things you could do with immortality. And then I started to think, but, well, what if my son wasn’t immortal? Would watching him grow old and die be too painful? Would over time, the curse of immortality, the affliction, be more than I could bear? So in the end of it, I decided it was probably better to die someday. But from that came this idea of a character who had the thing that all of us want more than anything, immortality, and he didn’t want it any more. So what would that look like? What would that guy do for a living? From that came this medical examiner idea, which is if he was initially a doctor that he would work as a medical examiner purely for research to be able to examine bodies and study the science and try and figure out some way to end his curse.”

ASSIGNMENT X: If Henry is aware that he not only resurrects, but vanishes from wherever he died to resurrect naked and in water, he’s aware something supernatural is going on, so why does he think he may find a clue to his condition in examining the corpses of ordinary people?

MATTHEW MILLER: I think for him it’s a combination of science and mysticism. There’s something obviously that defies science, there’s a supernatural quality to the show, that he can’t explain. And he does explore that stuff as well. It’s a simultaneous thing. But he still at his core is a man of science. And so he believes that there’s some version of some science that can get him out of this.

AX: Given that Henry has lived through the premiere of quite a few inventions, is he a fan of older technology?

MILLER: Yeah. That’s the fun stuff is watching all of him – his office, even his lair, his little laboratory, is filled with a lot of old lab equipment and occasionally some computers and modern things. It’s the combination of both.

AX: FOREVER is set in New York, but where do you shoot?

AX: And did you cast Judd Hirsch partly because he’s such a quintessential New Yorker?

MILLER: Yes. Everything about Judd Hirsch is right for the role.

MILLER: I knew her from a show called DO NO HARM that a buddy of mine worked on.

AX: The lead in that was a modern version of Dr. Jekyll and Mr. Hyde, so her last two roles have been as women involved with unusual men.

MILLER: Yeah, exactly. It’s true. There’s something about her.

AX: Were you familiar with Ioan Gruffudd before casting him in the show?

MILLER: Yes. Our kids go to preschool together. I knew him from the parking lot, so it was interesting.

AX: Did you encounter him at some point and think, “You know, he seems like …”

AX: Is there anything else you would like to say about FOREVER?