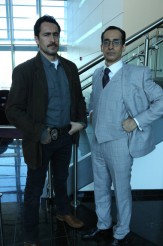 The actor talks about Season 2 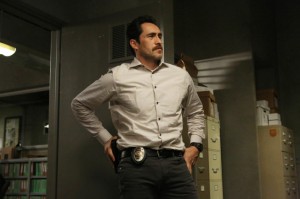 Complications abound in Season 2 of FX’s drama THE BRIDGE, Wednesdays at 10 PM. The series was developed for U.S. television by Elwood Reid & Meredith Stiehm, based on the Danish BRON, but this year, THE BRIDGE diverges greatly from its source material.

In Season 1 of THE BRIDGE, Demian Bichir’s character, Mexican police detective Marco Ruiz, suffered the loss of his son at the hands of his murderous ex-partner. Marco’s quest for revenge has caused him to make a deal with one of Ciudad Juarez’s biggest crime lords. To hold up his end of the agreement, Marco must return to Texas to work with El Paso police detective Sonya Cross (Diane Kruger) – who is investigating a murder that leads back to Marco’s underworld contact.

Bichir, who received a leading actor Oscar nominee for his work in A BETTER LIFE, is at FX’s session for THE BRIDGE for the Television Critics Association press tour. When the Q&A session is over, the actor/writer/director/producer, born in Mexico City, remains for some further conversation.

AX: Is Season 2 of THE BRIDGE the first time you’ve come back to a role after a long hiatus?

DEMIAN BICHIR: We did the same thing when I was part of WEEDS. It was hard to get [the character] back, because in between seasons, I also got to do other work and I had to gain a lot of weight and then to lose that weight and coming back to that character, that’s always challenging.

AX: Was it harder this time because Marco is a bigger part than the WEEDS character?

BICHIR: No, I think the emotional journey that my character goes through in this particular show made it a little more difficult, because he goes through a lot, emotionally and psychologically.

AX: Since Marco’s attempt to get revenge is very likely to get him killed in the process, does he see himself as somebody who’s going to die soon, no matter what happens?

BICHIR: I think Marco knows that he can go any time. He can die at any time, and that is exactly why he is more assertive and more outgoing in terms of trying to get the job done in time, before someone cuts him down.

AX: Is that also why Marco keeps pushing Sonya away? Is he afraid she’s going to get caught in the crossfire?

BICHIR: Absolutely, yes. Even though they don’t really have a loving relationship, they care for each other and they respect each other, and I know that she is in danger, being so close to the other side of the border, especially because I’m dealing with really, really bad guys. So Marco will always try to keep her away from danger as much as he can.

AX: This may be going into spoiler territory, but can you say if you have a lot of scenes with Franka Potente, who has joined the cast as a very dangerous character this season?

BICHIR: All I can say is that I wish I had more, and that’s a complaint that I have in regards to pretty much every other [actor] in the show. We have such a great, fantastic cast that it’s just a pity that I don’t have more scenes with everyone.

AX: Did you learn anything as either an actor or a person in the first season of THE BRIDGE?

BICHIR: You always grow with every project. Everything you do helps you more and be better in many ways. I really don’t have that clear [knowledge of what was learned] in a short term of time. It always hits me some years after that, some years after I finish a play or a film or a series, a TV show. It hits me. One morning, I wake up and I say, “Oh, hell!” And that’s when you sink all those thoughts and those teachings. I know that I’m a better person, and I don’t even know why. 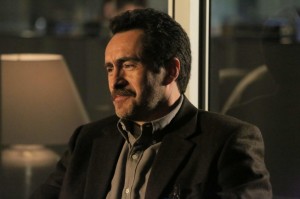 AX: Would you want to come back for a third season of THE BRIDGE?

BICHIR: I’m ready for eighteen thousand seasons, because we’re talking about this border between two fantastic, different yet very much alike countries that are bound to be forever together. And there are thousands of great stories. If I can be a part of them, I will be more than happy. I never really think ahead. I was happy when they called me to work on the pilot. I was even happier when they picked up the series and happier when they ordered a second season. But for me, this is it. This is what is scheduled and what we have. And I’m having a great time since Day One. This is what matters to me. If they order a third season and Marco is still there, we will celebrate that, but right now, this is what we appreciate and cherish.

BICHIR: I’m going back to finish a film that I directed and I wrote, REFUGIO: A CIRCUS TALE. Refugio is a name in Mexico that can be either male or female, and it also means “refuge.” My editor was doing the editing while I was doing THE BRIDGE. So as soon as I’m done here, I’m flying back to Mexico to meet with my editor again and we’ll finish that. After that, I will be doing some theatre in Mexico and that is that for the rest of the year.

AX: Do you also act in REFUGIO?

BICHIR: I play one of the roles in REFUGIO. I have a fantastic cast – Jason Patric plays a really great character, Eva Longoria also. We have a fantastic Cuban actor, Jorge Perugorria, and one of the lead girls is Stefanie Sherk, one of her first films, and we have a fantastic Mexican cast, Arcelia Ramirez, Ana Claudia Talancon, and many great actors. And my nephew [Alejandro Bichir], my brother’s son, plays me when I’m younger.

AX: Is there anything else you’d like to say about THE BRIDGE right now?

BICHIR: I really hope we can come back for another season so we can talk about the immigration issue a little deeper, in a more profound way, because there are many, many things going on as we speak, and that is something that we already talked about in Season One, but I still feel that this is a fantastic realm for those types of stories and we need to talk about those things.

AX: The Archdiocese of Los Angeles recently held an event to pray for the refugee children and the admission of the children into the U.S.

BICHIR: If we continue to tell the world that this [the U.S.] is the biggest, most powerful country in the world, we cannot forget about sheltering the refugees. Because these kids are running away from hunger, from murder, from violence, from drugs and gangs and Mexico has done it many times throughout history without the resources that we have here. So I think it’s our turn.