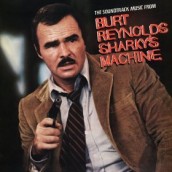 It’s rare when a soundtrack specialty label gives love to what are essentially an all-song albums, a genre that ruled during the 1980s with such releases as BAND OF THE HAND, TUFF TURF and CRUISING. Let’s hope these are but some of the titles that Varese Sarabande might put on their radar, as they’ve recently put out such welcome, song-filled releases out under it like THE IDOLMAKER, ANY WHICH WAY YOU CAN and HONKYTONK MAN. But with no offense to those latter two movies’ that featured a star-director known for his love of jazz, perhaps no film used that music as memorably as Burt Reynolds did for 1981s SHARKY’S MACHINE, a terrific soundtrack that has finally show up digitally (if not on CD) from Varese.

Better known for his wisecracking charisma, Reynolds was incredibly unsung as an action-centric filmmaker with particularly good taste in music, whether it was having Charles Bernstein’s strumming score for GATOR or Barry De Vorzon’s icy electronic work in STICK. For SHARKY‘s viscerally erotic take on LAURA via a hard-broiled cop flick, Reynolds ingeniously uses big band energy to match the swagger of a cop and his team of upstart detectives out to bust Atlanta’s Italian kingpin of crime. Outside of a James Bond opener, there are few title songs better at creating energetic anticipation than the jazz-funk groove of Randy Crawford’s “Street Life.”

Two smoky-voiced versions of “My Funny Valentine” by the great Chet Baker and Julie London become Sharky’s haunted fixation with a seemingly dead high class hooker, while such other standard-bearers as Doc Severinson, Joe Williams and Sarah Vaughan bring sophistication to the lethal sleaze that Sharky tries to rescue her from, an ironically detached sense of enjoyment heard with Peggy Lee’s vocals for the merry-go-round rhythm of “Let’s Keep Dancing” or the be-bop lite of The Manhattan Transfer’s “Route 66.” SHARKY‘s exceptionally assembled album also offers a terrific instrumental with an eerie Oriental “Drug Bust” and a swinging “Sharky’s Theme,” with Sarah Vaughan and Joe Williams’ end tune “Before You” turning from piano to a lushly optimistic strings, a duet that provides a great ending sense of relief after watching Henry Silva’s drug-crazed hitman blasted out of a skyscraper. As much sheer, sophisticated listening pleasure as it uses songs to reflect its characters’ attitudes, SHARKY’S MACHINE remains an exemplar of how songs can smartly be used in a terrific, gritty cop flick.

Click on the link to Purchase the SHARKY’S MACHINE soundtrack