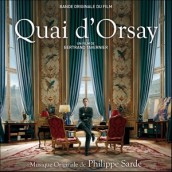 Phillipe Sarde makes his mark in his scoring homeland

A French composer who should have conquered Hollywood in the 80s with the likes of QUEST FOR FIRE, GHOST STORY and THE MUSIC BOX, but somehow ended up back in his native country, Philippe Sarde has most definitely stayed busy – and with no small amount of creative cleverness in his new score for QUAI d’ORSAY. Director Bertrand Tavernier has given his well-costumed period features a stylistic shot in the arm by adapting this cult comic strip, which gives AMELIE-like absurdity to the adventures of a hapless political speech writer. Yet Tavernier and Sarde don’t so much doff their costume drama stylings of LA FILLE DE d’ARTAGNAN and THE PRINCES OF MONTPENSIER  as much as they leave it on in whimsical tatters. Using an ersatz waltz-time theme, Sarde orchestrally conveys the elegance of French politicians to the manner born, but then introduces such surreal instruments as an Australian didgeridoo and melodies a la Rossini’s “Barber of Seville,” as done with classically antic rhythms, panicked piano runs and horns swinging in helter skelter for the latest emergency of state. The feeling is one of tuxedo’d panic, as if the orchestral ensemble was desperately trying to keep time with a composer having a delightfully Baroque breakdown. QUAI has a wonderful sense of classically cartoonish mania by way of a whacked-out jazz ensemble, reveling in the ridiculousness and mock suspense of what a gallery of blowhard prime ministers are planning next. It’s one of the most distinctively eccentric musical assaults on bureaucracy since Gary Chang and the Turtle Island String Quartet’s SHOCK TO THE SYSTEM back in 1990.

However, if you’re in a more classically costumed frame of mind, Quartet Records also offers Sarde’s score to 1997’s LE BOSSU (known in the U.S. as ON GUARD, a swashbuckler score that’s more beautifully resplendent than rousingly sword-swinging. There’s a sly humor at hand in his orchestrations, which also offer more exotic French period music, as well as gorgeous use of Mascagni’s “Calvalleria Rusticana.” An exceptional bonus on the album is Sarde’s “Concierto Por La Tierra,” a swooning symphonic work whose Debussy-like use of naturalistic, and sometimes modernistic string melody brings back memories of the composer’s score to TESS and THE BEAR. One can only imagine how his missed, lyrical touch would be welcome back in Los Angeles, whether it was played at the height of refinement or for the outright zaniness that he’s now more than shown himself capable of. 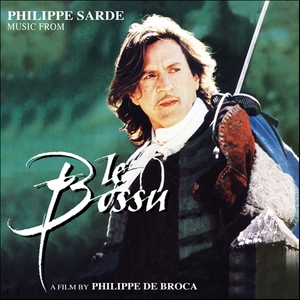 Click on the link to Purchase the QUAI d’ORSAY soundtrack

Click on the link to Purchase the LE BOSSU soundtrack