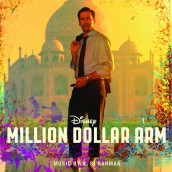 When A.R. Rahman first gained Oscar-winning attention in the western world for SLUMDOG MILLIONAIRE, it was as if some musical pitch hitter had arrived from nowhere, able to capture the exotic rhythms of his heritage via a pop beat as fresh as any album-spinning club kid (despite the fact that this relatively youthful composer-producer had been updating ancient Indian beats for quite some time). It’s a situation that couldn’t have made Rahman a better composer to play the sweet culture clash of a bunch of cricket players from the continent being potentially thrust into major league baseball for this Disney movie – a true winner in terms of quality even if it was a box office underdog. What’s more interesting is that MILLION DOLLAR ARM marks a Hollywood return for Rahman to his homeland after ELIZABETH: THE GOLDEN AGE,  127 HOURS and PEOPLE LIKE US, scores mostly devoid of hip Indian music – a comeback that Rahman makes with a winningly sweet vengeance.

While the songs that start MILLION DOLLAR ARM might not be another “Jai Ho,” the mixture of Rahman produced and performed songs have a cool groove that mixes raga with a hip-hop rhythm (and even a few industrial ones) in a way that’s accessible while honoring its musical ancestors, His nice score mixes voice, ethnic percussion and lush orchestral strings that convey the wonder of a desperate American sports agent thrust into a loudly colorful culture – and then the dramatic apprehension, and hope of the players he brings back to be reborn as baseball stars. It’s an effective emotional trip with the humorous percussion of a westerner’s get-rich plan mixing with glistening bells, orchestral sentiment and a truly gorgeous female vocal phrasings that hit a poignant chord in any musical language, not to mention capturing the suspense of a familiar “sports” score for the big end pitch – here given a transcendentally operatic tension as perhaps only an Indian could make the play. MILLION DOLLAR ARM rounds the bases between East and West with a contemporarily ancient style to award A.R. another big win.

Click on the link to Purchase the MILLION DOLLAR ARM soundtrack