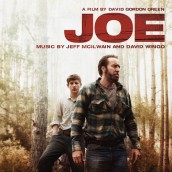 It might be said that David Wingo’s winning, southern-fried soundtrack for MUD was akin to an artily existential take on Charles Bernstein’s South-ploitation score for WHITE LIGHTNING. But now Wingo ventures once again into the land of valiant, and villainous rednecks with nary a rustic instrumentation in earshot for JOE. Joined by director David Gordon Green’s frequent composer Jeff McIlwain (SNOW ANGELS, THE SITTER), this duo instead hear the dark brew of ambient trouble growing to a boil inside of Nicholas Cage’s ex-con turned reluctant hero. It’s a palpable, unsetting atmosphere of dread that could just as easily serve as underscore for a serial killer film, which might just be the point of creating storm clouds of ambience, metallic scraping and piano to get across the character’s vulnerability.

Wingo and McIlwain contribute an understated, mesmerizing tension to JOE helping Green’s filmmaking and Cage’s performance to achieve a real sense that violence could break out at any moment during this supreme struggle of anger management. The alt. rock sound of FRIDAY NIGHT LIGHTS composers (and Sonic Youth successors) Explosions in the Sky are also on hand to give JOE a elegiac sense that all will somehow be right in this sad world, the dark vibe of its rustic, wood shack surroundings powerfully acknowledged in tone, as opposed to an outright musical drawl.

Click on the link to Purchase the JOE soundtrack