Home » under the dome tv series 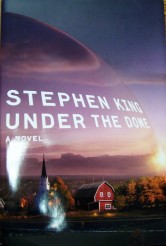 UNDER THE DOME by Stephen King
News

News: Stephen King UNDER THE DOME TV series to air in summer

The 2009 Stephen King novel UNDER THE DOME is getting the TV treatment as a scripted series on CBS which is set to air this summer.

Thirteen episodes will be produced and it’s part of CBS’s strategy to have high-profile scripted fare on in the summer as well.

At today’s CBS Winter 2013 TCA session, CBS Entertainment President Nina Tassler spoke about the series and what their intentions are for it moving forward.

“The script was developed at Showtime [and the option lapsed],” explains Tassler who says she got a call from Amblin and DreamWorks who wanted her to look at the script. “I read it over the weekend, and I loved it.  I just loved it.  And, you know, ever since JERICHO, for us, ever since ‑‑ I love these kind of bigger ‑‑ big‑idea shows.  And the auspices aren’t too shabby.  You’re talking about Stephen King.  You’re talking about Steven Spielberg.  And we said, ‘Look’ ‑‑ we had a meeting with Brian K. Vaughan, who is also not chopped liver.  And we sat down with Brian, and what we heard was this extraordinary vision for 13 episodes and beyond.  And I said, ‘You know, we really have a unique opportunity here.  If we package it properly, put the right auspices, to do a big summer event and to do a script to series, straight from script to 13.'”

The other important thing for Tassler was making noise in the summer, which she felt this did the trick.

“As you can see from the schedule, we’ve got a lot of fresh, great content,” says Tassler. “So it was a combination of the auspices.  It was hearing Brian’s vision.  We brought Neal Baer in to run the show with Brian.  Niels Arden Oplev is directing the pilot.  Jack Bender is the producing director on the series.  So when you have that kind of power above the line, I said, you’ve got the goods to really take a bold move and program it during the summer.”

As for the future of the show, if the ratings are goo, Tassler sees this as a regular summer fling.

“I’d love there to be another summer,” says Tassler. “I’d love this to be something that people really look forward to.  Look at how excited people get for BIG BROTHER.  We’d like to build it into a summer franchise.”