Home » News: Expect Moriarty to join CBS series ELEMENTARY before the season is up – TCA 2013 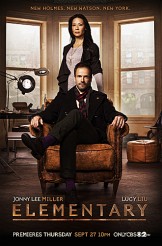 Plus, executive producer Rob Doherty talks about the show getting the prime post-Super Bowl slot on CBS

With the CBS Sherlock Holmes crime series ELEMENTARY becoming one of the highest rated new dramas of the fall season, executive producer Rob Doherty revealed that there are some great surprises up ahead, most notable is the introduction of famed Holmes nemesis Moriarty.

“Moriarty is coming, still coming, so look forward to back end of season,” says Doherty. “It’s tricky business, but I can’t wait to get more serious about Moriarty. In this day and age, it’s virtually impossible to stunt a role. Everyone knows in the universe he will be coming as a character so we have to be very careful and very quiet as we can. I want a tremendous actor, but it’s less fun for me if you know who it is and what they will be doing in the immediate future, but we’re a few more weeks out before we have to sweat that.”

With the success of ELEMENTARY, CBS has also given the series the prime post-Super Bowl slot to give it even more exposure.

“It’s an incredible opportunity to expose the show to those who may not have seen it yet,” says Doherty. “It’s a good example of what our show can do [and] our regular audience will have fun with it as well.”