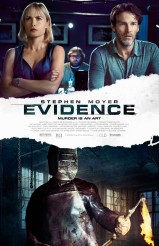 Whether their preferred fare is SAW, DOWNTON ABBEY or documentaries on the genetic engineering of wheat, one thing that unites virtually all viewers is intolerance of glitchy video. This sets up an immediate challenge within EVIDENCE, which is not just a found footage thriller, but a found damaged footage thriller. This turns out to be important to the plot, but it’s still a test of patience.

A police team headed up by Detective Burquez (Radha Mitchell) and newly-returned Detective Reese (Stephen Moyer) try to piece together what caused what initially appears to be a fiery, fatal bus crash seventy-two miles outside Las Vegas. They have footage from four different cameras that were on the bus, but are handicapped by the fact that the fire has corrupted some of the data. The footage includes up-and-coming actress Leann (Torrey DeVitto), her aspiring filmmaker friend Rachel (Caitlin Stasey) and Leann’s musician boyfriend Tyler (Nolan Gerard Funk) who are all traveling fromL.A.to Vegas on a private bus, driven by prickly Ben (Harry Lennix). The vehicle also picks up young apprentice magician Steve (Albert Kuo), dancer/acrobat Vicki (Svetlana Metkina) and mysterious passenger Katrina (Dale Dickey).

The bus flips in the middle of nowhere, and when its battered passengers emerge, they walk to the nearest set of buildings – an abandoned, trashed facility. Soon enough, a masked killer shows up, blowtorch in hand.

The ending is at once fairly clever and partly nonsensical. On the one hand, most of the things that seem to be mistakes are explained, and on the other hand, it raises a whole lot of new questions (which can’t be discussed here without giving things away).

With four cameras (most of them videophones) capturing various parts of the action, the intent appears to be to create a horror movie done in RASHOMON style, with some major nods to THE USUAL SUSPECTS. It’s a clever idea, and writer John Swetnam deserves credit for this and a number of structural innovations.

There’s a problem here of style over substance. The video, with its blackouts, static, bad focus, etc., is such a chore to watch that the experience starts to overwhelm the film’s content. Even V/H/S, the found-footage horror movie about old VHS tapes, showed more restraint in how much deliberate bad tech viewers can take.

Then there’s the substance. There are a lot of good actors here – Moyer, Mitchell, Lennix, Dickey, DeVitto and Stasey, plus Barak Hardley as a police technician all come off quite well – but they aren’t given a lot of help from their material. We’ve seen these grim, overworked police before and the other main characters don’t come off as distinctive, despite a fairly leisurely introduction.

Finally, there’s the issue of scares. A good twist earns a lot of forgiveness on other fronts, but while EVIDENCE gets us to wonder what’s going on and provides an answer that is satisfying on a number of levels, it is almost never actually frightening. That’s a killer flaw in a horror movie.

EVIDENCE suggests that there’s a much better film lurking under the surface here, but the one we get results in, at best, a hung jury.