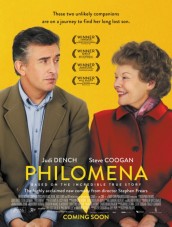 It’s helpful to go into PHILOMENA knowing that Martin Sixsmith, who wrote the nonfiction book THE LOST CHILD OF PHILOMENA LEE, and Philomena Lee herself are both real people. So (alas) are the conditions young, unmarried pregnant women were forced into in Irish nunneries for many years before and after Philomena’s day, and so are the circumstances surrounding Philomena’s son. All of this gives PHILOMENA quite a lot of range – social, political, historical and emotional.

Martin, played here by the film’s co-scenarist (with Jeff Pope) Steve Coogan, has just gotten sacked from his government job due to being misquoted. At a cocktail party, he’s approached by one of the waitresses, Jane (Anna Maxwell Martin), who hears him talking about his days in journalism. Jane thinks Martin could perhaps do a human interest story on her mother Philomena’s (Judy Dench) search for Jane’s older half-brother, taken from Philomena about a half-century earlier, in hopes that such a story might bring the quest to a conclusion.

After being appallingly rude at first, Martin thinks better of it and meets with Philomena and Jane. Back in Rosecrea, Ireland in the 1950s, Philomena (played as an adolescent by Sophie Kennedy Clark) found herself pregnant at fourteen. Her family sent her away to a convent, where she and other girls were forced to work in the laundry and do other manual labor. Childbirth was without aid of medical care or anesthetics, after which – assuming mother and child both survived – visitation hours were very brief. The mothers were coerced into signing documents that gave the Church the right to put the children up for adoption, which they did to couples who could prove they were practicing Catholics and could afford the sizable “donation.”

These circumstances, chronicled in both fiction and nonfiction films and books, turn out to be only the tip of the iceberg in Philomena’s case. Having pitched the idea to an editor (Michelle Fairley), Martin gets research funds so that he and Philomena can travel to theUnited States, where clues suggest Philomena’s son Anthony, no doubt renamed, was taken by his adoptive family. Who Philomena’s son became adds a whole new layer to the story.

This is fascinating, moving and often incendiary material, but the bulk of the film is the relationship between Philomena and Martin. Philomena, who has spent her life working – primarily as a nurse – has never been to America before, nor has she been treated to expense accounts and room service. Martin is depicted as something of an insensitive upper-class jerk who is reflexively condescending, but learns to be more of a human being through the experience.

Coogan gives a wonderful performance and has some great funny lines, but the characterization of Martin is perhaps the most dubious part of the film. Granted, it’s possible the real Martin Sixsmith was like this, or at least humbly described himself this way, but it feels rote, as though the filmmakers believed they had to put some conventional conflict/resolution between their protagonists. There’s more than enough going on here to keep us engaged without trying to gild the dramatic lily. Otherwise, the writers and director Stephen Frears maintain a gentle tone that lets both audience and characters experience emotions as they arise, without forcing the issue. Frears gives us a lot of natural beauty as well, giving us a sense of where his people are and what surrounds them at all times.

Most moviegoers (and British theatergoers) are aware of Dench as a source of primal power. As Philomena, Dench demonstrates that she likewise adept at playing a woman who is capable of cheerful unworldliness, timidity and uncertainty, while still possessing a core of deep conviction.

Clarkis very affecting as the young Philomena and Barbara Jefford is a tower of poisonous righteousness as the nun in charge during Philomena’s days at the convent. Fairley (probably best known as Catelyn Stark of GAME OF THRONES) is witty and worldly as Martin’s anything-for-a-story editor.

PHILOMENA encompasses so much so adroitly – it really is a remarkable story – that we can admire its structure as a film, even as we absorb its sometimes startling facts and as we truly feel for its people.