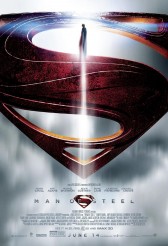 A superhero movie of exposition and collateral damage

The last big screen take on Superman, SUPERMAN RETURNS, looked and felt very much like a follow-up to the ‘70s/’80s films starring Christopher Reeve. No one is going to mistake the new MAN OF STEEL as a relative of those earlier features.

This take on the mythology from director Zack Snyder and writer David S. Goyer (who crafted the story with DARK KNIGHT colleague Christopher Nolan, one of MAN OF STEEL’s executive producers) isn’t precisely revisionist, but it is somewhat novel. There’s no trace of Lex Luthor, the adult Clark Kent/Superman/Kal-El (Henry Cavill) is not employed by the Daily Planet at the film’s start, and there’s a sense of looming tragedy here that is more common to the source material comic books than to movie/TV adaptations.

Here, the villain is General Zod (Michael Shannon), who we see having a major difference of opinion with Superman’s father Jor-El (Russell Crowe) back on Krypton. The situation leaves Zod determined to track down Jor-El’s son Kal-El wherever he may be, which as we know is Earth. Clark’s adoptive father Jonathan Kent (Kevin Costner) has instilled in Clark an imperative to keep his powers a secret, but when Zod’s quest threatens Earth,Clark finds it’s hard to both protect the planet and maintain anonymity.

Let’s start with the good. Cavill is charming and sincere as Clark, Amy Adams is a determined and heroic Lois Lane– probably the least shrewish and most active thus far – and Shannon, so good as the intimidating, tortured Nelson Van Alden on BOARDWALK EMPIRE, makes for a highly intimidating, tortured Zod. The supporting cast is fine.

MAN OF STEEL’s structure is on the nonlinear side, with a lot of flashbacks to Krypton and Clark’s childhood with his loving adoptive parents –Diane Lane, playing older than she is, makes a fine Martha past and present. This slows momentum at times, but isn’t one of the film’s biggest problems.

There are two issues that seriously impair MAN OF STEEL, though it’s likely that many viewers will be bothered by one much more than the other. First, there is a lot of exposition. Now, some setup is a science-fiction/fantasy piece is warranted, but it doesn’t seem likely that many people will come into the theatre knowing nothing at all about Superman and his origins. Explaining the whys and wherefores of his origins, abilities, privacy issues, etc. at this kind of length doesn’t move us in either emotion or narrative pace. It would make things slow even if we were learning new information, but for a lot of viewers, this earnest exploration of known territory – even with the filmmakers trying to invest feeling into it – is not very exciting.

Then there’s the matter of collateral damage. Superman has generally been painted as a more cheerful and resilient sort of hero than Batman, but if there’s a valid case for giving him more angst, it’s a valid experiment. We accept that Zod, who considers Earthlings lesser beings, is perfectly happy to destroy whole buildings in pursuit of Kal-El. What doesn’t gibe with any version of Superman that still allows him to be super is having him get so angry that he smashes Zod through tall buildings that have people in them. Other versions of Superman would see that Zod had knocked the foundations out of a high-rise and then jump in to hold up the structure until people could be evacuated. This Superman contributes to the destruction. We don’t see mangled bodies, but we know they’re there.

Asking us to soberly consider Superman’s moral qualms while at the same time expecting us to overlook the fact that, well, he’s destroying inhabited structures is trying to have things both ways, and we’re not so caught up in thrill, novelty, tension or even just superhero fun that we don’t notice.

MAN OF STEEL is well-made, has some striking visuals and interesting new ideas about the title character and his universe, but it’s also slow going in many sections and seemingly oblivious to what it’s doing and saying in others.