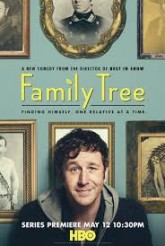 The co-creator/exec producer/actor talks about his new series

In HBO’s FAMILY TREE, Sundays at 10:30 PM, Chris O’Dowd stars as Tom Chadwick, a 30ish man at loose ends who decides to track down his relatives, a quest that takes him from England to America.

FAMILY TREE was created by Christopher Guest (known for his improvisational comedy films including A MIGHTY WIND and WAITING FOR GUFFMAN, and for being one of the members of Spinal Tap, as well as being an actor) and Jim Piddock. Both men serve as executive producers on the series; Guest also directs, while Piddock costars as Mr. Pfister.

Piddock, who originally hails from Kent, England, has an extensive career as a writer, actor and producer. He talks about doing all three jobs on FAMILY TREE.

ASSIGNMENT X: Have you worked in American television before as a writer/show runner?

JIM PIDDOCK: As a producer, I’ve written a number of pilots. The only show I really have worked on as a producer/writer/creator was a BBC show [TOO MUCH SUN].

PIDDOCK: Yeah, it’s a little different in a number of aspects. The fact that we’re doing the two countries makes it different, being a co-production makes it different, and doing eight episodes is sort of right in the middle there – it’s not a BBC six and it’s not an HBO ten or twelve. So it’s almost like doing a comedy miniseries.

AX: With your leading man Chris O’Dowd, was there something that you and Christopher Guest saw him in that made you go, “Ah, that’s the guy”?

PIDDOCK: When we first started working on this, I had just seen BRIDESMAIDS, and we talked about who would be right, and I said, “If we can make this character Irish, there is no better person, in my view.” And so we looked at that, and the two Chrises met in London when we were there over in April [of 2012], meeting with the BBC, and [Guest] right away said, “Yeah.” When I saw that, I thought there are very few people who can play the leading man and be funny, and then I saw him on a talk show and he was so charming and so wonderfully natural that I felt that he was a real [find] and Chris [Guest] right away responded.

AX: The family in FAMILY TREE seems to be English, whereas Chris O’Dowd’s accent is Irish …

PIDDOCK: That’s explained in the very first episode. His mother is Irish and his father’s English, and he grew up with the mother for a large portion of his life inIreland, and then he moves toLondon.

AX: Some of the characters have very deep back stories, so that the actors who are playing them can draw from that when they’re called upon to improvise. How many characters do you have to do deep back story for?

PIDDOCK: Well, certainly all the ones that you meet repeatedly, so there are at least eight to ten that we did a lot of back story on. And then the ones who are coming in for an episode, you don’t really need to do that same depth, but they’re still incredibly detailed.

AX: Do the actors ever come to you and make suggestions like, “What if this is part of the back story?”

PIDDOCK: They do – they actually go to Chris [Guest], really, because he’s directing it. So yes, they will tend to meet with him, all the actors individually, and that will come up.

AX: You’ve directed before – did you have any desire to direct any of FAMILY TREE?

PIDDOCK: I’m happy to do whatever – I have directed and I’m usually with Chris the whole time, so we discuss stuff and I’m obviously learning certain stuff from him, being more on this side of the camera with this project.

AX: Given your involvement as a writer/producer, did you have to do more or less back story for the character that you’re playing?

PIDDOCK: It’s funny, because we did some, but he let me kind of do my thing, and I let him do his character, too. And then we were both like, “Oh, God, what are we – help” [laughs].

AX: Are we entirely with Chris O’Dowd’s character? Do we ever cut to, “Meanwhile, back in England”?

PIDDOCK: Yes, we do. We do keep both [theU.S. and theU.K.] alive and there are phone calls that go back and forth, and then two of the other main characters come over and join him. So we have three of our main characters over here by the end of the series.

AX: What would you most like people to know about FAMILY TREE?