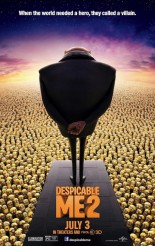 Between the 2010 release of the original DESPICABLE ME and its new sequel, DESPICABLE ME 2, the filmmakers seem to have figured out that their primary selling point is not their main character Gru (voiced by Steve Carell), now a reformed villain and not the, well, despicable figure he was in the original. It’s not even the trio of cute little girls he adopted last time around. Rather, it’s Gru’s minions, those strange little goggle-wearing, Twinkie-shaped-and-colored beings who babble in their own language, giggle uncontrollably and act like the Three Thousand Stooges, though they attempt to obey Gru’s every order and adore the kids.

Gru is pressured by the Anti-Villain League (think James Bond’s handlers) to smoke out a still-active villain. To this end, Gru is paired up with chatty but adept superspy Lucy (voiced by Kristen Wiig), which immediately has his kids thinking of wedding bells, no matter how much Gru insists he has no interest in any kind of romance, ever. Gru is sure his new nemesis is the formidable El Macho (voiced by Benjamin Bratt), though the evidence points elsewhere and Gru may be swayed by personal concerns. Whoever is behind it, there is indeed a nefarious plan afoot, and minions begin disappearing.

The main plot tracks well enough, with Gru and Lucy diligently seeking their adversary in absurd surroundings. The balance between Gru being a loving father and retaining his hauteur and villain’s logic is handled well, while Lucy is personable and eccentric, without slipping over into being annoying. The focus is off the little girls, so there’s nothing as indelible this time around as the original’s “It’s so fluffy!”, though the unicorn motif remains.

The big set-pieces belong to the minions, who sing (albeit mostly in nonsense-word minions-speak), dance, have romantic fantasies, dress up in weird costumes and continue to slap, smack and poke each other with glee. These creatures are so cheerfully absurd that even though you may feel a little bit like a sucker for succumbing, chances are, you will actually laugh out loud a few times, especially if you like bizarre song parodies (there is at least one number you’ll never hear the same way again).

There are some bits here that very small children will find scary but tolerable and everybody else will find amusing. The filmmakers deserve special credit for noticing that the opposite of yellow is purple (if this doesn’t make sense to you now, it will when you watch the movie). Mainly, DESPICABLE ME 2 sidesteps its predecessor’s jolting tonal shifts. We don’t have to see Gru fight with himself over his paternal feelings nor go through any sort of predictable cul-de-sac character drama to get to the good stuff. The visual humor is continuous and there’s a pleasant light touch all round, so that writers Ken Daurio & Cinco Paul and directors Pierre Coffin and Chris Renaud all seem to be on surer footing this time around.

The voice cast seems to be having a very good time, with Carell doing his Eastern European best as Gru, Wiig being enthusiastically nerdy as Lucy and Bratt displaying a pleasingly goofy side as El Macho. Russell Brand entertainingly reprises his Hammer-esque Dr. Nefario. Directors Pierre Coffin and Chris Renaud once again supply the squeaky, warbling minion voices.

Overall, DESPICABLE ME 2 is fun. It doesn’t try to tug at your heart nor terrify you – it’s just happily silly entertainment that genuinely is for the whole family, from tykes to those actually shelling out the money for the tickets.