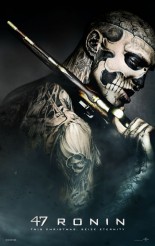 In Japan, the real-life story behind 47 RONIN has roughly the same cultural impact that the Alamo has in the U.S. Indeed, there’s a name – Chushingwa – for the genre of books, plays, films, TV shows and artwork about the 47 masterless samurai, or ronin, who banded together to avenge the death of their lord, even though they knew that to do so would result in their own executions, assuming they weren’t killed in the preceding fighting.

The new film 47 RONIN stars Keanu Reeves and features magical creatures and witchcraft. Imagine a film about the Alamo with much made of the fact that one of the main characters is half-Japanese, with lots of Native American mythology influencing events, for a notion of the meta-weirdness of this movie.

That said, taken as a standalone piece, 47 RONIN is consistently beautiful to look at in the manner of a ‘50s or ‘60s epic. It has screen-filling battles, gorgeous vistas and intricately constructed shots. Director Carl Rinsch and the production design team deserve a lot of credit for the consistent lushness on view here, though the 3D dampens some of what would otherwise be some stunning color compositions.

The film starts with an earful of voiceover exposition, as we see young Kai running through the forest. He is an orphan fleeing forest spirits, and he is adopted by kindly Lord Asano (Min Tanaka). However, since Kai (played as an adult by Keanu Reeves) is half-foreigner, he is told he can never be samurai. Needless to say, he also can’t court Lord Asano’s beautiful daughter Lady Mika (Ko Shibasaki), but that doesn’t stop them from falling in love.

When the Shogun (Cary-Hiroyuki Tagawa), ruler of allJapan, comes to honor Asano with a visit, rival Lord Kira (Tadanobu Asano) arrives as well. Through manipulation and witchcraft, disaster befalls the house of Asano. The Shogun decrees that the samurai who served Lord Asano must now leave the region and forbids them to take revenge. However, Asano’s right-hand man Oishi (Hiroyuki Sanada) is not so easily dissuaded and gathers his erstwhile comrades, Kai included, to fulfill the demands of honor.

This is all pretty classic stuff, as notions of righteous retribution are hardly confined to Japanese culture; getting the old gang back together for one last job is the stuff of American films beyond number. The plot moves along fairly quickly, with well-framed swordfights (we can see the combatants’ footwork, a big plus) and some very cool depictions of elements of Japanese mythology, such as the birdlike Tengu, embedded in the storytelling and inventively realized on the screen.

Sanada is outstanding as the determined Sanada and Reeves makes Kai a man who is honestly humble and wants to do the right thing by his comrades and by the code of honor that dictates their actions.

The rest of the cast is mostly good, though at least one performance suffers from what looks like bad dubbing and perhaps inadequate experience on the part of the performer. Everyone else gamely rises above dialogue that is at best serviceable and at worst so stilted that someone merely hearing the soundtrack might conclude that this is a relic of the Fifties. This tends to dilute the intended impact of some serious notions of honor and sacrifice.

At its best, 47 RONIN is an elegant paean to a philosophy that transcends death and that visually resembles live-action flashes of a Hayao Miyazaki fantasy. At its worst, it sounds wooden and silly. The overall effect is somewhere in the middle.

HARRY POTTER AND THE DEATHLY HALLOWS – PART 1 is one of the Blu-ray an...
CD Review: STAR TREK IV: THE VOYAGE HOME: Ultimate Edition soundtrack
FLACK: Anna Paquin chats about her acting and producing on her new dar...
EVERYTHING'S GONNA BE OKAY: Creator and star Josh Thomas on his quirky...