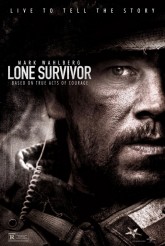 A fact-based modern warfare movie, designed to pay homage to the troops

Based on the events of the 2005 Navy SEAL mission Operation Red Wings, LONE SURVIVOR depicts a relatively short but devastating clash between U.S. and Taliban forces in the mountains of Afghanistan. Director/writer Peter Berg has adapted the book by Marcus Luttrell and Patrick Robinson in apolitical fashion. We’re following the Navy, so we’re on their side, but the whys and wherefores of the U.S. military presence in Afghanistan is never mentioned.

Given the film’s title and Luttrell’s name in the credits, it’s impossible not to deduce the broad strokes of what occurs. Director Peter Berg, who adapted the screenplay from the book by Luttrell and Patrick Robinson, nevertheless manages to create sequences of suspense and even surprise regarding the way things go down. For those wondering what ground troops are dealing with in Afghanistan simply in terms of the terrain, LONE SURVIVOR is visually eloquent. Even these elite warriors, who have triumphed over their grueling training, cannot compete with villagers who’ve spent their lives traversing the seemingly vertical mountainsides. We see Luttrell and company lose their footing and go tumbling in painful falls, then watch a local youth nimbly jump down a series of very long drops.

The combat scenes are brutal and, even though they are broken up by cutting back to base, feel as though they occupy the bulk of the running time. Once battle is joined, there isn’t a great deal of cause and effect, just shooting, diving for cover, bloodshed and pain, interspersed by the clear loyalty and camaraderie – and growing anguish – of these men. The dialogue comes across as lifelike banter, though there are times it’s hard to credit, even if this is what really happened, that these men can withstand so much physical damage and still continue to function. It’s all handled very proficiently, but because the context is so narrow, it’s hard to fully invest in what’s happening. If a little of the carnage had been pared down to make way for a little more characterization, it might have been a good thing.

The third act of LONE SURVIVOR, when Luttrell encounters some circumstances unexpected by both him and us (but which are prepared for by a sequence early on), brings back the gift of unpredictability and variety. There’s even a bit of unexpected humor, as well as a lesson about Afghan customs. End credit photos of the real people involved, living and dead, are affecting and informative.

Wahlberg is solid as the upstanding Luttrell and Foster is riveting as the personally romantic, militarily hard-nosed Axe. The rest of the cast is strong.

LONE SURVIVOR shows that war is hell and that the SEALS are brave, dedicated and deserving of our respect. This seems a fair enough conclusion, and this appears to be the movie that its makers intended, but it still feels like a little more depth could have provided much more impact.