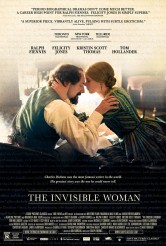 An intriguing view of a romantic arrangement involving Charles Dickens 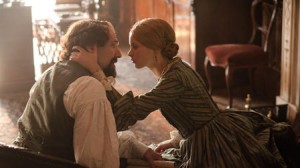 Victorian-era writer Charles Dickens was such a champion of fairness and kindness in his work that it’s easy to suppose he routinely exhibited these traits in his real life. The truth, according to many biographers, was much more complicated.

In THE INVISIBLE WOMAN, based on Claire Tomalin’s nonfiction book of the same name about Dickens and Nelly Ternan, we see Dickens perform some actions that he’d only assign to his wickedest characters, in deep denial of the exact nature of what he’s doing. Ralph Fiennes, who directs and stars as Dickens, and screenwriter Abi Morgan don’t advocate for or against the man, but simply show him charging through work, play and love with an energy that does justice to his reputation.

Nelly (Felicity Jones), when we meet her in the 1885 prologue, has embarked upon another life. The body of the film, which jumps back about fifteen years earlier and proceeds from there, shows how an eighteen-year-old Nelly becomes involved with the then forty-five-year-old Dickens. Almost from the moment he sees her, Dickens is absolutely taken with Nelly, the least talented member of an acting clan. Nelly’s mother Frances (Kristin Scott Thomas), knowing Nelly is unlikely to have a career in the theatre, sees the possibilities in Dickens’ interest in her daughter and encourages it. Nelly herself doesn’t want to be simply the mistress of a famous man, but her options are limited. Moreover, she actually does have feelings for Dickens and worships his writing.

THE INVISIBLE WOMAN is a persuasive portrait of both the relationship between Dickens and Nelly and the world around them. We see how Nelly feels outraged at being essentially coerced into intimacy, while at the same time keenly experiencing an intellectual and perhaps even spiritual connection with Dickens. We also see how Dickens persuades himself that Nelly’s understanding of what he’s trying to say in his work means that he’s justified in wanting to be closer to her on all levels, even if it means behaving in a ghastly manner to his conventional but decent wife Catherine (the excellent and courageous Joanna Scanlan).

There’s also more than a little backstage joy when Dickens gets together with his friends to work on a play – we see not only his love of theatre, but the filmmakers’ great affection as well. In some ways, this is the most enveloping part of the movie, where everyone is coming together toward a common goal with no corollary injuries.

The film is lovely to look at via Rob Hardy’s cinematography, with the kind of brooding imagery we may associate more with Thomas Hardy or the Bronte sisters than with Dickens. This is not, however, the visual language of guilt or passion, but rather conflicted emotions. We are more intellectually curious about the interactions between Charles and Nelly than we are in danger of being swept away by them; they are intriguing to watch, but the film doesn’t try to make a case that we’d want to actually be either one of them.

In focusing almost completely on the section of Nelly Ternan’s life when she’s involved with Dickens, the script barely touches on how she later re-invented herself – we see the end result, but not the process.

As an actor, Fiennes ably gives us Dickens as a man who is a bit intoxicated with his own sense of invention, but who cannot get enough of external acclaim. He has a sense of plaintive gentleness with Nelly, as well as a yearning to be known by her. Jones expertly takes Nelly from a cheerful young woman of her day to someone furious at being trapped to an adult whose consciousness of her place in the world makes her restrained and secretive. Scott Thomas ( who played the Fiennes character’s lover in THE ENGLISH PATIENT) is subtly, splendidly worldly asFrances, and Hollander is delightful as Collins.

THE INVISIBLE WOMAN is a quietly compelling chronicle of an uneven but binding relationship. Although it begins and ends with Nelly, the story is told not from her point of view but from an outside standpoint, giving us facts and incidents and leaving us to make up our own minds.