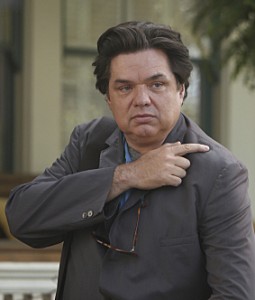 In Showtime’s dark comedy THE BIG C, created by Darlene Hunt, Laura Linney’s Cathy Jamison has been coping in every possible way – humorously, emotionally, fighting, raging, accepting – with terminal cancer. The fourth mini-season, consisting of four episodes in an arc entitled THE BIG C: HEREAFTER, concludes in the series finale Monday May 20, with Cathy reaching the end of her journey with her husband Paul (Oliver Platt)

Platt has played Cathy’s sometimes self-centered but ultimately loving husband Paul through the series’ four years. Platt is a Canadian native who, as the son of a diplomat, traveled extensively in his childhood; as a successful actor, his career has also taken him to around the world. A few of his many feature credits include FLATLINERS, FROST/NIXON, 2012 and X-MEN: FIRST CLASS; on television, he starred as George Steinbrenner in the miniseries THE BRONX IS BURNING. At a Showtime event for the Television Critics Association, Platt took some time to discuss THE BIG C and his upcoming feature film GODS BEHAVING BADLY.

ASSIGNMENT X: Do you have any preference between playing characters like Paul, who are a little bit tone-deaf to themselves, versus characters who are keenly aware of both themselves and what’s going on around them?

AX: Well, you’re often cast as a guy who may have blind spots about himself, but who’s able to point out the foibles in others around him.

PLATT: I’ve never thought of it that way. I’m very instinctive about the way that I choose roles and my really only metric is, does it in interest me? And usually it will interest me if it’s different than something I just did.

AX: What did you find particularly interesting about Paul at the beginning?

PLATT: The real appeal to me from the outset was the way the relationship had been designed. Here was a guy who clearly – they had the type of marriage that worked because they were different people. This guy was very gregarious, but maybe not living the most wildly examined life. And he was going to be sailing into a situation where he was going to be forced to grow up. And that’s what the muscular part of the narrative, and also this relationship, was for me. To get to explore a modern marriage in this crisis, with an actress who I admired so immensely, and a group of people and a staff of writers who just astonished us every week. It was a wonderful thing, and I also will say it was a tremendous privilege, as somebody who has been attached to narratives that he’s involved in, having them disappear under your feet midstream, to be able to know that you are telling the ending of a story while you’re telling it is a great privilege, and it’s something that I didn’t really know how much of a privilege it was until I actually experienced it. But it’s a marvelous thing, and it adds this whole level of not just the practical in terms of as a storyteller, it gives you an opportunity to shade things in a subtle way, but you also just really appreciate it as a storyteller. But yeah, it was the arc of his growth in response to this crisis that made it really, really worthwhile for me. And I’m grateful for it.

AX: Has your experience with THE BIG C made you feel any different about the television experience, knowing that a series can have a planned conclusion, rather than having it disappear under your feet?

PLATT: No, not in terms of giving me any more faith [about] that – it’s a very random thing, and it was just lucky, but it gives me an appreciation of what a privilege it was.

PLATT: I have a movie one that I shot in between the last two seasons, which is a movie that Big Beach made, the producers of LITTLE MISS SUNSHINE. GODS BEHAVING BADLY is what the title might be; that was the name of the successful British novel [by Marie Phillips] that it was adapted from, with John Turturro, Chris Walken and Edie Falco and Alicia Silverstone. It had a marvelous big cast.

AX: Is the title to be taken literally?

PLATT: No, it’s actually to be taken literally. It imagines the Greek gods as sort of these characters who, because of their immortality, they can’t [die] – they’ve maybe fallen a little bit and they’re living sort of like aristocratic Russian exiles in a townhouse on the Upper West Side and they’ve maybe lost their way a little bit. I play Apollo, which tells you something about the sensibility of the thing.

AX: Anything else you’d like to say about THE BIC C or your career overall?

PLATT: I don’t know. I consider myself very lucky and don’t take it for granted and I love what I do. I’m very grateful that I get to make a living this way and I feel very privileged that I continue to get to do it and that I still like doing it, that I love doing what I do.