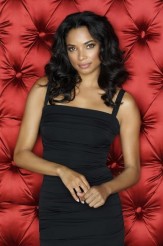 The actress talks playing a mom and a cheated-on wife 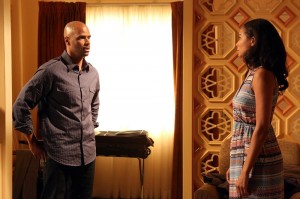 In the first-season finale of MISTRESSES, on ABC Monday September 9 at 9 PM, Rochelle Aytes’ character April Malloy must choose between her husband and her boyfriend, though that’s far from the only crisis facing her and the other three leading ladies, Alyssa Milano as Savi, Yunjin Kim as Karen and Jes Macallan as Joss.

Native New Yorker Aytes was actually in another MISTRESSES project – a 2009 Lifetime movie that costarred Milano’s CHARMED colleague Holly Marie Combs – along with being a regular or frequently recurring character on DRIVE, THE FORGOTTEN, DETROIT 1-8-7 and DESPERATE HOUSEWIVES; her feature credits include WHITE CHICKS, TRICK ‘R TREAT and THE INHERITANCE and videogame players will know her from LEFT 4 DEAD 2. Aytes sounds very excited about working on MISTRESSES, which has been adapted for American television by K.J. Steinberg, based on the BBC series of the same name.

ASSIGNMENT X: What can you tell us about April?

ROCHELLE AYTES: She is a widow, she’s also a mother, a single mom, and just when she feels like she’s ready to move on and start dating again after the death of her husband, which was a difficult thing to have to deal with, she gets some devastating news that her dead husband had a mistress and also a son. So throughout the course of the show, she’s dealing with the repercussions of that. It’s just a roller-coaster ride. There are a lot of different dramatic events that take place.

AX: Yunjin Kim’s character was having an affair with a married man who dies. Is that April’s husband?

AYTES: No. I’m separate from her storyline. [Kim’s character Karen] had an affair with her patient, who died. My character was married to Paul Malloy. I’m just finding out three years later. So it’s completely separate. The little boy [from Paul’s affair] is three years old.

AX: So is April suddenly a mother?

AYTES: I’m suddenly a stepmom. I’m a mom already – we already have a child together. So all of a sudden, I’m a stepmom.

AX: Is this your first time playing a mom/stepmom?

AYTES: I was a mom actually in three episodes of DESPERATE HOUSEWIVES. But aside from that, this is the first time I’ve played a mom on a series, and it’s been wonderful. It’s been different, it’s been challenging. But [April’s] daughter Lucy, her [real] name is Corinne Massiah, she’s a great actress, and we’ve had the greatest time.

AX: What is different on MISTRESSES than on your previous series regular gigs?

AX: Is this the best wardrobe you’ve had so far?

AX: And what is the relationship between April and the other main women in the show?

AYTES: I’ve known Savi and Joss since I was about ten [Kim’s Karen is a college friend of Joss]. We may not agree with a choice that one of our friends makes, but we definitely support each other through it all, so I think that’s what’s important.