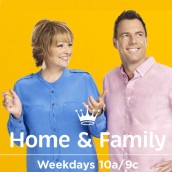 HOME & FAMILY, Hallmark Channel’s lifestyle program hosted by Cristina Ferrare and Mark Steines, was nominated for an Emmy in its first season. Now in its second season, HOME & FAMILY, which deals with every topic imaginable involving its title, airs weekdays and shoots five days a week, forty-four weeks a year.

Ferrare is at Hallmark’s session for the Television Critics Association at the Beverly Hilton Hotel, and she’s taken on some hosting duties for the luncheon, having planned the menu for the array of Hallmark talent, creative staff and executives, as well as the TCA membership.

Ferrare, a native of Cleveland, Ohio, had her first film role as David Niven’s daughter in 1968’s THE IMPOSSIBLE YEARS. Although she has had a few film and television roles since – most recently in 2005’s THE WEATHER MAN, playing herself – she wound up taking another path in life.

ASSIGNMENT X: Why did you stop acting when you did?

CRISTINA FERRARE: You know what, I didn’t love it. And you have to love it, because I always believe you have to follow your passion. And cooking and my expertise is being with a live audience, that’s what I’m good at, so that’s what I wanted to do.

AX: How did you become involved with HOME & FAMILY?

FERRARE: I did the first original version of HOME & FAMILY in the ‘90s. I did the first version in 1996, and then they brought it back again last October with Mark, and Woody Frasier, who’s our producer, called me about six weeks into it, and asked if I would be interested in coming back, and that’s how I ended up back there.

AX: Do you and Mark Steines have a division of responsibilities?

FERRARE: Not really – he does a lot of the DIY projects and I do the cooking, but it’s basically pretty even. It’s just like in a real house, although he says he’s the head of the house and I always tell him I’m the neck, because I can make it turn any which way I want, just like in that movie MY BIG FAT GREEK WEDDING.

FERRARE: You know, there’s something new that I learn every single day because our guests are so interesting and there is such an array of different things and different subjects every single day. I love all the subjects we do on women and women’s health issues, but I like the cooking the best.

AX: You planned this lunch for the members of the Television Critics Association and your colleagues at Hallmark today. Do you often plan meals for a couple hundred people?

FERRARE: I’ve actually cooked for about a hundred and fifty people. Cooking is something I’ve done all of my life, and it’s not daunting to me, because cooking is my first passion, it’s what I love to do the most. If I could, I would sit home all day long every day and just experiment with recipes and continue writing cookbooks. I’ve written three of them already, so I love it. This wasn’t daunting at all. I just thought about what was in season and what people would like, and I wanted to make sure that for you or for the other people who have to go back to the panels, that you felt well-fed and refreshed and not too much sugar and fat and salt and stuff to make you feel terrible.

AX: What would you most like people to know right now about HOME & FAMILY?

FERRARE: First of all, that Mark and I both love doing it, we love going to work every single day, we love our jobs. It’s forty-four weeks a year, two hours live every single day. We want people to come to our home, because our home is like your home, and everything that goes on in a real house happens in our home, and hopefully, we can help you sort through a lot of things that go on in your home and share it with us.