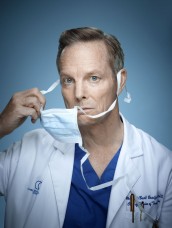 On TNT’s MONDAY MORNINGS, TNT Monday nights at 10 PM, the show centers around a hospital’s weekly Morbidity and Mortality meetings. Bill Irwin’s character Dr. Buck Tierney is often the focus of these meetings, as so many of his patients die that his colleagues have nicknamed him “007,” suggesting a license to kill.

Irwin, a native of Santa Monica, California, would seem to have a license to do theatre. He’s a graduate of the Ringling Brothers and Barnum & Bailey Clown College (yes, this is a real institution). As an actor, Irwin won a Tony Award for his portrayal of Martin in the 2005 Broadway revival of WHO’S AFRAID OF VIRGINIA WOOLF? and was nominated for Best Play/Director/Choreographer/Actor for the 1989 production of LARGELY NEW YORK. He also created and starred in the acclaimed FOOL MOON.

On television, Irwin has had recurring roles on CSI and SESAME STREET, and film roles have included LADY IN THE WATER and IGBY GOES DOWN. Asked about MONDAY MORNINGS, he sounds like he’s having a great time.

ASSIGNMENT X: Do you enjoy playing the character who, at least from what we’ve seen so far, is consistently in the most trouble with the Powers That Be?

BILL IRWIN: I do. I love it. And one of the reasons that it’s playable – when I first started skimming the pilot script, I thought, “Oh, this guy – he thinks he’s dispassionate, but he’s really a hot mess. Oh, that’ll be fun.” But you get nervous as an actor. “Am I playing somebody who’s ungracious and abrasive just for the sake of it?” The great thing about the writing on this is that I can be passionate about these things I believe in. Like “This guy, he’s not going to live, he should be pronounced dead, because his heart is useful to a guy down the hall.” And I can really stand behind that.

AX: As an actor, you’re known for your great physicality. Do you get to use that at all here, or do you have to kind of tamp down?

IRWIN: At the moment, my character is rather buttoned-down and repressed, and that is a great and enjoyable challenge for an actor. He doesn’t allow himself overt physical action. He’s always radiating his take on any given situation physically. It’s a very physical show. These characters are always saying to me, “If I hit you right now, I’ll make you one of the ten percent [who don’t survive the hospital experience].” These doctors are really big hot messes.

IRWIN: I was on a very short-lived project called LIGHTS OUT, a boxing show [created by] Warren Leight. And everyone was sure it would have a long life. And when it didn’t quite find the audience, it was just one season. So I had done that, and I’ve done some recurring things on network shows. The responsibility to have a character that you can sustain is different. It’s very exciting.

AX: How is it getting back into the rhythm of a series?

IRWIN: That’s a big challenge, but I love it. Some of the scenes in the script are like doing theatre – it’s like doing a play for a day or so. I’m going to work on an off-Broadway project, and I’m only now seeing how thoroughly ingrained I got into the TV rhythm. I’ve got to step out of it now – we’re doing something called OLD HATS inNew York at the Signature Theatre [which opened March 5].

AX: Anything else you’d like to say about MONDAY MORNINGS?

IRWIN: Here’s one of the things I love about the show. Without being heavy-handed or self-congratulatory, it really touches the nerve points in the culture. Issues get examined without it feeling like, “Uh-oh, here we are on an issues show.” And from a really emotional point of view, these people are all arguing about things that are again really hot points in the culture. And that’s [due to series creator] David Kelley.

ACTICE and BOSTON LEGAL, among others) co-created MONDAY MORNINGSwith fellow executive producer Dr. Sanjay Gupta. After a morning Q&A panel at the Television Critics Association press tour, Kelley takes a moment to talk about the challenges of doing a medical show and what he hopes viewers will derive from it.

KELLEY: I guess I’d like them to know that if they sample it and watch it, they’ll be entertained and moved. I think that what will be incumbent upon us to get out there is that it’s different from other medical shows. Because a medical franchise – it’s not reinventing the wheel. They’ve been done before.