The actor talks his unconventional version of Hercules, plus GAME OF THRONES 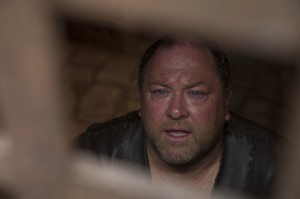 Most people’s mental image of Hercules from Greek mythology is of a tall, muscular, handsome demigod who can flatten tall monsters with a single punch. This would not precisely describe the Hercules played by Mark Addy in ATLANTIS, the action/adventure/fantasy now in its first season on BBCAmerica, Saturdays at 9 PM.

In ATLANTIS, created by Johnny Capps, Howard Overman and Julian Murphy, we’re in the realm of the ancient Greek myths, but the legend of Hercules has been principally invented by Hercules. He teams up with a pre-Argonauts Jason (Jack Donnelly), a pre-snakes Medusa (Jemima Rooper) and a pre-mathematics-changing-theory Pythagoras (Robert Emms) as they all wrestle with their respective destinies.

Addy, of York, England, starred in the British sitcom THE THIN BLUE LINE, then won international fame as one of the amateur male strippers in 1997’s THE FULL MONTY. The steadily working actor also played the ill-fated King Robert Baratheon in the first season of HBO’s GAME OF THRONES.

At a group question-and-answer session for ATLANTIS, Addy says his children were surprised to hear he’d been cast as Hercules. “They were like, ‘What? You’re playing Hercules?’ ‘Yeah, why not?’ ‘Well, isn’t he …?’ I showed them Britain’s strongest man. These are the kind of guys who are twice my size, but in a kind of bowling ball sort of shape. These are the strong guys. That’s what he is. He’s strong because he’s father’s a god, not because he goes to the gym every day. That put their minds at rest. But he’s not the Hercules that people think. Although Alice [Troughton], one of our directors, the front page of her copy of the script has an old painting with Hercules peeing – drunken, naked Hercules just having a pee. That’s the kind of guy that this one is. It’s great. For a fat fifty-year-old actor, it’s brilliant.”

He’s also excited about the more serious side of ATLANTIS. “It is an interesting debate about fate and destiny and whether your path in live is determined from the outset or whether it’s something that you can mold and shape to your own needs and desires. That’s a fascinating element to it as well.”

Later on, Addy is at a party thrown by BBC America, where he’s happy to continue discussing his unique portrayal of Hercules.

ASSIGNMENT X: After doing THE FULL MONTY, did that help you lessen any inhibitions about doing other things for film and television, including this version of Hercules?

MARK ADDY: Well, I suppose, yeah, but you know, the more stuff you do, the more comfortable you are. They’ve encouraged me in playing Hercules to be perhaps slightly larger than life. There is a slightly theatrical side to Hercules, in that he’s like Falstaff in a way. He picks himself up and he tells stories about himself and embellishes the truth. So there is a bit of bravado and bulls***, frankly, but that’s the way he operates.

AX: So he’s a bit of a self-salesman?

ADDY: Yeah. And Jason and Pythagoras don’t buy it, because they know the truth. But other people do – it gets them work. They’re always owing money, so it’s a way of funding their pretty meager lifestyle. He doesn’t have to take his clothes off – well, actually, I do have a couple of topless scenes in this [laughs], so be prepared for that.

AX: Some of the other characters have found their way to Atlantis. Is Hercules an Atlantean?

ADDY: Yeah, he’s Atlantean. It’s his house that they all live in, although it’s not really – it’s a house that he was given for an errand, for a task performed at some stage. So he doesn’t really own it – it’s somebody else’s. They have nothing, really; they’re quite poor.

AX: Do they have you doing some version of Hercules’ labors, like cleaning out the notoriously filthy Augean Stables?

ADDY: Well, we don’t know. That may play a part somewhere down the line [laughs]. The problem is, although it’s not really a problem – the problem is that the Labors were a punishment for [Hercules] killing his wife and children. For a family show, we don’t really want to delve into that part of the story. But knowing these guys, they’ll find a way of working it in – they like subverting things.

ADDY: I loved the scripts. They sent me the first episode, which is obviously setting up who’s who and what’s what, but also, you’re in with the Minotaur, straight off. I’d expected more of a gentle preamble, really, but no, these guys are like straight in there, Minotaur is first up. And then they sent me what is now Episode Nine, which I swear, if you got that as a movie script, you’d be delighted. It’s all about going to the Underworld and Pandora’s box. Stunning, stunning writing. And that’s only Episode Nine, it’s not even the finale episode, it’s just one of the others. Fantastic writing, great tale, it’s a lot of fun to play.

AX: Speaking of fantastic writing, were you expecting the reaction that GAME OF THRONES has gotten?

ADDY: No. Because GAME OF THRONES and George Martin were not widely known in the U.K. So we had no idea of the kind of following that the books had and that the series would have. But it’s a fantastic piece of work. This [ATLANTIS] is the closest, in terms of scale and ambition, although it’s a very different kind of show. It’s the nearest I’ve seen to something like GAME OF THRONES in its epic scope. So we’ll see. Hopefully, people will like this – there’s a lot to enjoy. And it’s not like anything else, I think. It’s a very different thing.