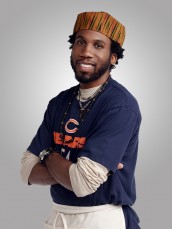 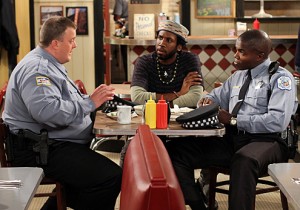 CBS’ half-hour comedy MIKE & MOLLY is now in its fourth season, Mondays at 9 PM. Though the title characters, played by Billy Gardell and Melissa McCarthy – who won an Outstanding Actress Emmy for her performance – are at the center of the series, their family and friends also make a large contribution to the series.

A case in point is Samuel, the Senegalese immigrant played by Nyambi Nyambi. Samuel has the very first line in the very first episode of MIKE & MOLLY, but Nyambi hails from Norman, Oklahoma, so his real-life speaking voice is very different than the one he employs on the series. This is immediately evident in conversation at a party thrown by CBS for the Television Critics Association.

ASSIGNMENT X: Did you have to study to do a Senegalese accent?

NYAMBI NYAMBI: It’s me celebrating my family. We’re Nigerian, so I took what I knew about my family and then also studied some tapes on Senegalese and did my own thing that way. And I visited Senegal.

AX: Are your parents first-generation from Nigeria?

NYAMBI: I’m first generation, yeah. My parents moved here to study at the University of Oklahoma, so that’s where I was born.

AX: Were your parents like, “If acting is your passion, go for it, son,” or were they like, “Oh, no, you’re going to starve”?

NYAMBI: You know what’s funny? I told them I wanted to be an actor and they said, “Yeah, forget it.” I was always doing something in the arts and my dad’s thing was, “I just want you to graduate from college. And then you can do anything you want.” I graduated from Bucknell with a business degree and after that, I was like, “I don’t want to be in the business world, I want to be an actor.” So then he was like, “Go ahead.”

AX: Had you done half-hour television as a regular before?

AX: When you started on MIKE & MOLLY, did you have a sense it was going to become a hit?

NYAMBI: I was just like, I’m just glad to be there, happy. I was along for the ride, and I didn’t know. I knew it was something special, but I didn’t know it was going to be like this.

AX: At what point did you realize you were on a hit? Was it when Melissa McBride broke out on the big screen in BRIDESMAIDS in 2011, or before that?

NYAMBI: Well, we knew before that, because people said so, but then when BRIDESMAIDS happened, I mean, we knew that for Melissa, that was going to be major. And then Reno [Wilson, who plays Mike’s police partner Carl] said, “That’s going to be amazing for us!” And then we had this pause and he laughed this maniacal laugh. So he knew – it’s special. Melissa’s a genius, so the fact that we have a genius on our show, it bodes well for us.

AX: Do you feel like Samuel is getting to do more as the series continues?

NYAMBI: Yeah. It’s grown. I’m now best friends with Mike and Carl, I was part of the wedding party. It’s going to grow some more.

AX: Is half-hour comedy at all like doing stage, or is it a completely different thing?

NYAMBI: This is the closest thing you’ll get to doing stage, because of the live audience. The only thing is that they stop you, and then they say, “Pick up right there, go back, do that scene again.” But with the audience there, it gives you that feeling of the stage, which is where I come from.

AX: Did you create a back story for Samuel?

NYAMBI: Yeah, of course! I created a back story, and then that week it changes, because the writers will write something different, something funny and amazing. So it’s always evolving always changing.

AX: What was the back story you came up with before they changed it?

NYAMBI: I don’t remember it, it was so long ago.

NYAMBI: I love those episodes where all of us are together. My favorite scene that I was a part of was when, for a Halloween episode, I had to dress up as SpongeBob. I love physical comedy, so it was an opportunity to do that, and they said, “Nyambi, sit in the chair.” I’m like, “Okay.” They said, “Sit in the chair with this huge costume on.” “All right.” “We want you not to sit in the chair.” “Cool.” The audience – they were laughing for so long. To tease Reno with that as well was just so much fun.

AX: Is being a regular on a TV series pretty much what you thought it was going to be, or are there surprises?

NYAMBI: I have stuff that’s in development for myself that I’m writing.

AX: Anything else we should know right now about MIKE & MOLLY?

NYAMBI: That I’m blessed, thank you guys for watching and I hope to bring you guys more laughs.