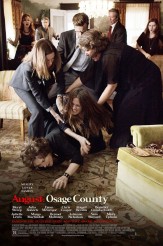 AUGUST: OSAGE COUNTY won the 2008 Best Play Tony for its debut Broadway performance, and it’s easy to see why – Tracy Letts’ script is well-constructed and cumulatively devastating. The film version, with a screenplay adapted by Letts and directed by John Wells, opens the play up somewhat by giving us some of the wide open plains, but the main action is between the characters.

This is not a movie you want to see if you are feeling depressed. If, however, your family is driving you crazy, you will come away feeling thankful that at least you are not related to the Weston clan of Osage County, Oklahoma. We meet patriarch Beverly (Sam Shepard) as he quotes t.s. eliot and we’re introduced to Beverly’s cancer-stricken, pill-addicted wife Violet (Meryl Streep) as she needles her husband, as well as Johnna (Misty Upham), the young woman Beverly has hired to help look after Violet.

This is a difficult, entangled bunch, with some secrets we can guess early on and some that surprise. Steve’s trajectory, for instance, we can see coming maybe even before he does, and what we learn at the end feels like it’s been lurking in the subtext the whole time, but other revelations are eye-widening.

On stage, AUGUST: OSAGE COUNTY reportedly was very funny (dark, but hilarious). While not questioning the veracity of these reports, it’s hard to see in the screen version how this was even possible. Violet is mean, self-serving and a wreck, but there’s nothing amusing in her interactions with her kin. The closest we get is Martindale’s Lettie Mae, who at least shows some affection in teasing her nieces, and Cooper’s easygoing, good-hearted Charles.

Martindale is a good reason to watch anything she’s in and Cumberbatch fans will want to see this because the actor is so entirely different here than he’s been anywhere else to date. Streep gives us a fully thought-out performance, but she runs up against the aforementioned problem – she’s giving a performance that’s meant to be at least partially comedic, and the tone is so grim that it comes off as jarring, rather than an interesting contrast. Likewise, we can understand why Roberts’ Barbara is so angry, but we also understand why everyone around her is put off by her self-righteousness. We are intrigued by these people, but it’s tough to spend much time with most of them. That’s partly the point, of course, but viewers should approach with caution.