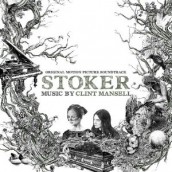 With his creepily rhythmic fusion of orchestra, rock and electronics, Clint Mansell had been a go-to guy when it comes to capturing a building sense of psychosis, whether it’s cutting-edge synth mad science in PI and MOON, Middle Eastern music possessing a serial killer artist in SUSPECT ZERO, or the cool strings for the teen thrill killers in MURDER BY NUMBERS. But it was Mansell’s ever-more insane twisting of Tchaikovsky for a BLACK SWAN ballerina that really made him a go-to guy for women on the verge of a nervous breakdown. For STOKER, Mansell applies a slightly more groovy classical sensibility for another hopelessly repressed heroine for even more diabolical enjoyment

With OLDBOY director Chan-wook Park constructing STOKER  for the height of archly antiseptic stylism, Mansell’s score has a foreboding, fairy tale sound to it. Ghostly girl voices, creeped-out strings, and enough tubular bells to suit another EXORCIST weave a neo-Gothic spell about STOKER, music that’s at once sympathetic with the anti-social problems of its ersatz Wednesday Addams, but also full of maliciously subtle black humor. And while Mansell plays about with stormy horror score stuff, it’s all part of a knowingly cruel joke that drives its heroine mad. Few composers can play rhythmic alt. escalation like Mansell, and possessed with a memorable theme, the composer engages in any number of rocking builds that will be manna from heaven for anyone who enjoyed REQUIEM FOR A DREAM or THE FOUNTAIN. But if there’s a standout instrument in STOKER,  then it’s a virtuoso piano, its tunes authored by minimalist master Philip Glass for STOKER‘s memorable cues “Duet” that’s more like a duel as India is joined at the keyboards by her uncle, two themes seamlessly interplaying with their own shades of cool psychosis.

STOKER‘s song selections also brim with clever irony, among them Nancy Sinatra and Lee Hazlewood’s western jazz swing for “Summer Wine” and Viorica Cortez’s aria from Verdi’s “Il Trovatore,” as something bad always happens in mansion-filled movies of this sort when opera is playing. But STOKER‘s determinedly modern tune is Emily Wells dreamy trip-hop beat as she gives voice to India’s inner thoughts for “Becomes the Color,” the song’s beat collapsing on itself with a bunch of weirdo effects.

Clink on the link to buy the STOKER soundtrack