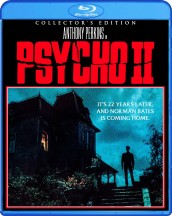 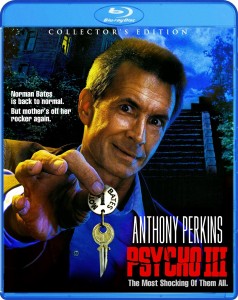 Twenty-three years after Alfred Hitchcock made history with his black and white 1960 thriller PSYCHO, Universal Pictures decided to make a non-Hitchcock sequel in 1983.

What could have been an absolute train wreck, turned out to be PSYCHO II, a surprisingly effective thriller directed in a very Hitchcockian style by Richard Franklin.

Anthony Perkins returned as the enigmatic and psycho of the title Norman Bates. After committing the murders in the first movie dressed as his dead mother (who he killed), he’s now being released from the loony bin as PSYCHO II begins.

The nervous tics are still there, and the surprise that Bates is a psycho is no longer there. What’s great about the Tom Holland script and Franklin’s direction, is they play with what we already know about Bates. You’re just waiting for him to finally snap again and go after people who deserve to die.

The story follows Bates as he comes home to clean-up the motel that’s been turned into a drug and prostitute hot spot, and also live in the house on the hill where his nightmares first started.

Along the way he befriends another damaged soul played by Meg Tilly and there are nice nods to the original PSYCHO throughout.

PSYCHO II isn’t parody, nor is it a blemish on the original film. It’s faithful to the tone and spirit of the original, and even though it was a shameless attempt to cash in on the horror craze of the early 1980s, the end result was handles with finesse, care and tact making it one of the most surprisingly underrated horror sequels of all time.

1986’s PSYCHO III is not nearly as good, and was directed by Perkins himself. It has some nice suspense and scares, and it also features a very memorable theme by composer Carter Burwell, but at this point, it’s simply more of the same.

The new object of Norman’s obsession is a woman named Maureen Coyle (Diana Scarwid), a nun who left the convent because her lack of faith in God. Of course, Maureen sets off Bates’ tingly psycho sensation because of her resemblance to Marion Crane (Janet Leigh).

As always, Perkins is good, but PSYCHO III is the least of the three official PSYCHO films.

The special features are nice and the first of its kind of U.S. release and the new high-definition transfer showcases the excellent cinematography by Dean Cundey on PSYCHO II in particular. PSYCHO II presents commentary with Holland, vintage video and audio interviews with Anthony Perkins, Very Miles and Richard Franklin, the theatrical trailer and the TV Spot.