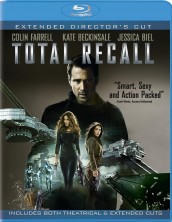 TOTAL RECALL Highlights this week in Blu-ray and DVD Releases 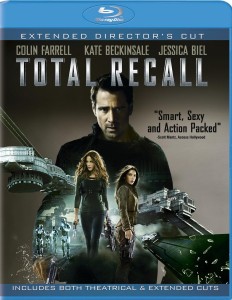 TOTAL RECALL – Anyone going into this thinking it will be even close to the original starring Arnold Schwarzenegger is fooling themselves. First, the vast improvement in special effects just blows the old one out of the water. Second, there was no way that they would make something so campy in today’s Hollywood. But given the improvement of special effects it doesn’t mean that it still captures the same feeling of the original. It really can’t because obviously we have seen it already and know what to expect – at least those that are old enough to have seen it. Still, it has a strong cast with Colin Farrell, Kate Beckinsale (who steals the show as the murderous wife), Jessica Biel as the true love interest and BREAKING BAD’s Bryan Cranston.

TOTAL RECALL is fun despite just being a straight-forward action science-fiction flick. The campy nature as I said before has been replaced with straight out action but they do try to work in some of the funny stuff from the original including the hooker with three boobs and a complete move away from Mars as this version takes place on a future Earth that has come into chaos over the years. The whole move away from Mars may violate some of the older fans idea of this film but it works considering they don’t really need to get there for this film (unlike the whole plot where Mars had air from an ancient society). The Blu-ray version looks even better especially with all the great special effects that are used. A rental or Netflix option at the very least. 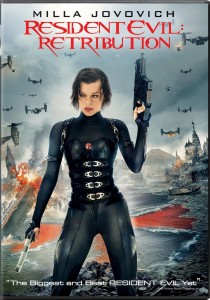 RESIDENT EVIL: RETRIBUTION – At this point, the RE franchise in film bares zero resemblance to the video games of which the movies were spawned except for some names of the characters. Whereas the first few films tried to somewhat follow what the games presented, the last three have gone completely away instead creating their own world filled with deadly zombies, the ever-evil Umbrella corporation and mutant undead that seem unstoppable. Once again, Milla Jovovich slides into the role of Alice once again battling Umbrella minions and hordes of zombies. RETRIBUTION picks up where the last film left off with the humans released on the freighter Aracadia getting attacked by Umbrella. It is a brutal attack and leaves many dead including some of the stars from the previous films (presumably). This time Ada Wong and Leon Kennedy are finally introduced (long loved characters from the game) and while it seems like we have seen much of the fight sequences before, it remains fun. And as long as it remains fun, they’ll keep making them and this certainly leaves the door open for a RE6. 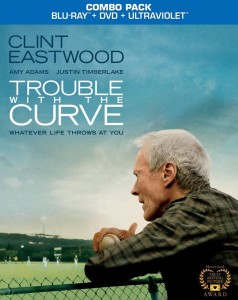 TROUBLE WITH THE CURVE  – You gotta hand it to Clint Eastwood. Just when you think he’s done it all in his career, he turns around and keeps surprising you. How the same man that did so many terrific westerns and UNFORGIVEN and DIRTY HARRY could turn around to do a GRAN TORINO or TROUBLE WITH THE CURVE shows just how strong of an actor he has become. Eastwood plays a baseball scout whose judgment in predicting the next big thing has been called into question because of his age. However, he thinks he still has it but just in case, he calls in his daughter (played by Amy Adams) to help him on his latest scouting trip to save his career – even if it means causing a major wrinkle in her own career as an attorney. Good drama and definitely worth checking out. 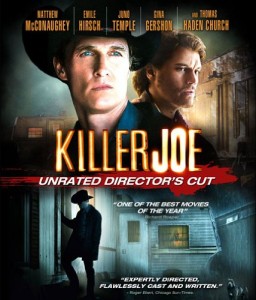 KILLER JOE – Matthew McConaughey stars in this interesting title about a police dude that moonlights as a hit man. But not just any hit man, one of legendary status. When a dude gets in some serious gambling debts (Emile Hirsch), he hires the hit man to do some dirty work. But when they can’t come up with enough cash to do the deed, Killer Joe kidnaps the guy’s sister until they can pay up. This isn’t a pretty picture or one that will have everyone glowing but it is packed with a slew of bad guys doing bad things that continue to spiral out-of-control in grisly fashion. A good slow Friday night film.