TCA News: POWERS adaptation still in limbo at FX, but not dead 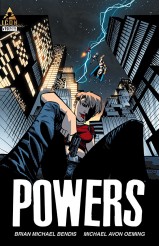 TCA News: POWERS adaptation still in limbo at FX, but not dead

“We didn’t pick the pilot up,” says Landgraf. “We did a fairly substantial rewrite which would require pretty substantial reshoots of the pilot. We’re in the process of deciding whether to pull the trigger on the reshoots. I adore the underlying property. It’s the most difficult adaptation I’ve ever worked on.”

Landgraf explains that much like HBO transforming the fantasy film genre into a successful 10:00 pm drama, they’re struggling to do the same thing with the super hero genre.

“It can be done, but it’s proving to be difficult,” adds Landgraf.