Home » TCA News: Chelsea Handler glad she’s not playing herself on new NBC comedy ARE YOU THERE, CHELSEA? 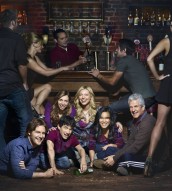 TCA News: Chelsea Handler glad she’s not playing herself on new NBC comedy ARE YOU THERE, CHELSEA?

Talk show host Chelsea Handler adds the sitcom to her resume with the new NBC comedy ARE YOU THERE, CHELSEA? which is based on her book and life exploits and her love of Vodka. The series airs Wednesday nights at 8:30 pm beginning January 11 following WHITNEY.

Laura Prepon plays a younger Chelsea, while Handler plays her own sister on the show. While speaking during NBC’s TCA press tour, Handler explained she didn’t want to play herself.

“It’s a dream come true to have someone else portray me and a pleasure to play my sister,” says Handler. “Now I can do everything I’ve accused [my sister] of and re-enact it before her eyes. It’s a lot more fun to play her than myself.”

Although Handler is currently all over the network promotions of the show alongside Prepon, she’s actually only a guest star on her own show appearing in seven of the 13 episodes.

“It’s Laura’s show,” admits Handler. “I wanted to her to have as much time without me. We all had a really good time, so we did it as often as I could. I would love to be in it as much as I can, but I have some other jobs.”

And in terms of changing the title to ARE YOU THERE, CHELSEA? from ARE YOU THERE VODKA? IT’S ME CHELSEA (that’s the title of the book the series is based on), Handler says it was to make it more accessible to mainstream audiences

“Not everyone is into alcohol as much as I am,” says Handler. “It’s not cable, it’s network, and we wanted people to get into the show [especially] for those who don’t have as big  a drinking problem as I do.”