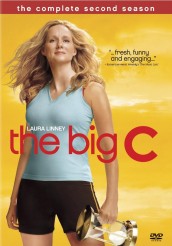 TCA 2012 News: Showtime talks THE BIG C and how they will conclude the cancer comedy starring Laura Linney

Even though the Laura Linney cancer comedy THE BIG C has last three seasons on Showtime, it was announced at the Showtime TCA 2012 Press Tour that the series will be wrapping up with a “special run” season.

“We are moving toward the conclusion of THE BIG C with a special limited run series consisting of four one-hour installments,” says Showtime President David Nevins. “This show has always required a delicate touch and I can’t think of three more talented and skillful people than Darlene Hunt, Jenny Bicks and the brilliant Laura Linney to handle this tricky subject matter. From it’s inception, the show has been unique in its premise and its tone, and I’m excited that we’ve come up with a unique and form breaking way to bring conclusion to Cathy’s story.”

One of the benefits of being a premium cable outlet, observers Nevins, is that they have the ability to conclude their series regardless of ratings or success.

“I think it’s important that shows are able to plan their end and do it the right ways,” says Nevins. “I think we have a contract with our audience. [THE BIG C] was very interesting and novel and, I think, [this is] sort of a form breaking way to handle where the show is going. And I think it’s going to make a really interesting season. I think the bigger picture is how these shows end – how WEEDS ends, how DEXTER ends needs to be planned. I got the privilege of getting to plan the ending on  FRIDAY NIGHT LIGHTS with Jason [Katims]. And we had two years to sort of build up to it and do it the right way. And it was actually the finale episode that Katims won the Emmy Award for best writing. So I think rather than we don’t have to be like the broadcast networks that have to make split second decisions and cut shows. So I think it can be built in really nice, satisfying ways.”