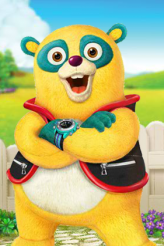 The actor talks about his helpful cartoon bear character, plus LORD OF THE RINGS

SPECIAL AGENT OSO is the title of the popular Disney Junior cartoon. The show is named for its hero, a stuffed teddy bear – “Oso” is Spanish for “bear” – who works with U.N.I.Q.U.E. (the United Network for the Investigation of Quite Unusual Events). Oso’s assignments usually involve helping children in need.

Sean Astin, who provides the voice of Oso (and is one of the series’ producers), is here to talk about SPECIAL AGENT OSO. He seems absolutely delighted by the performer who is walking around in a Special Agent Oso costume. “I just met my alter ego,” Sean marvels. “He’s so beautiful – cuddly and fluffy and I just love him!”

As the father of three young daughters, Sean often participates in school events. Sometimes, youngsters recognize his voice as belonging to Oso, though it depends on the group, Sean says. “Certainly with [daughter] Elizabeth, I’d go to her classrooms sometimes and be the mystery reader – the mystery reader is outside, and the kids get clues about who it is, so they guessed it was me and I’d come in. I think I brought some OSO posters for people, pictures or something like that. Actually, I did it both at the preschool and at the second-grade class. At the preschool, I did Oso’s voice. ‘It’s all part of the plan!’” The preschoolers were not impressed. “‘Nah, it didn’t sound like him,’” was their opinion, Sean relates with a laugh. He did better with older children, when he went to visit a second-grade class. “I was like the mayor of the second grade.”

Sean’s daughters are usually happy about their dad being an actor, though sometimes they are surprised by what he can do. “I think sometimes it’s exciting and fun, and other times, it’s not so much,” Sean says.

He gives an example, talking about when the family went to Baltimorefor the eightieth birthday of Sean’s father, actor John Astin [THE ADDAMS FAMILY].  “There was pay-per-view. My wife and [daughter] Isabella at midnight ordered OSO, the thing she wanted to watch. It coincidentally was the episode where the name of the main little girl that was being helped was Isabella. And she had in the episode two sisters, Elizabeth and Alexandra. I have three daughters – these are their names.” Isabella began to notice the family resemblance, Sean says. “‘That’s my name!’ ‘That’s Elizabeth’s name!’ ‘That’s Ali’s name!’ Then she stops. ‘Did Dad have something to do with this?’” Sean laughs.

Sean’s oldest daughter Alexandra is now age fifteen. When she was a very little girl, before her sisters were born, Alexandra appeared as a little hobbit girl with her father, who played Sam, in the movie LORD OF THE RINGS: RETURN OF THE KING. Although it was a major event at the time, Alexandra doesn’t remember much about the experience nowadays, Sean reports. “We did a photo shoot with a couple of the other actors, and she was really nervous that she wasn’t remembering things, but I think she remembers more, depending on the context. But she has pictures from the time that she looks at. I don’t remember many things from before I was five or six. She was seven when the film premiered, so she definitely remembers the premiere, and she remembers people’s general personalities. When she looks at the movies, I think it’s hard for her to think back [to making them].”

SPECIAL AGENT OSO plays to children all over the world, from the United States toTurkey to South America to Japan to Iceland. Why does Sean think the show is so successful. His answer is quick and to the point. “It’s good!”