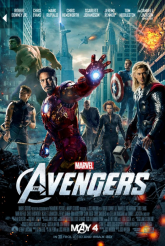 THE AVENGERS is spectacular in several senses of the word. It is literally a spectacle, with people flying up into the sky, monsters plummeting out of it, airships flying through it and so on. However, the real dynamism here is in the character interactions, not something one expects of even a regular superhero movie, let alone one where a bunch of different storylines have to intersect meaningfully.

Followers of Marvel Comics characters in the movies have already seen Robert Downey Jr. star in two IRON MAN films, Chris Evans as CAPTAIN AMERICA and Chris Hemsworth as THOR, the alien mistaken by the ancient Vikings as a god. Although Mark Ruffalo is new to the role, there have been two previous HULK movies in the last decade. (There have also been SPIDER-MAN, FANTASTIC FOUR and X-MEN movies, but those don’t come into play here.) Scarlett Johansson as Black Widow, Jeremy Renner as Hawkeye, Clark Gregg as Agent Coulson and the essential Samuel L. Jackson as S.H.I.E.L.D. Director Nick Fury have all turned up in one or more of the aforementioned features, so THE AVENGERS comes into frame lugging a trainload of back story.

However, THE AVENGERS hits the ground running, more or less literally, and finds deft ways to bring us up to speed on the various histories should we have missed or forgotten anything, without boring those who know. Director/writer Joss Whedon, working from a screen story co-crafted with Zak Penn, finds enormous amounts of fun in putting together people who are accustomed to being viewed as odd with new folks they can’t help finding even odder.

The short version of the set-up here is that something is stolen from S.H.I.E.L.D. and Fury reaches out to his operatives – some less enthusiastic than others – when it turns out that the Earth is imperiled by the object itself, the entity who has stolen it and the allies he summons.

We know that ultimately all of the main characters are going to figure out how to work together to save the planet – they are, after all, super heroes, not super-shirkers – but see how they variously overcome their differences or revel in their similarities is much of the fun. Most films in this genre – the X-MEN series being the notable exception – have to focus on one awesome figure and make every other good guy a bit less awesome in comparison. AVENGERS can’t, shouldn’t and doesn’t do that. Here, everyone has a tactical function, but more, each one of the Avengers fills the screen in a way that none of the others can.

Whedon directs the action kinetically and makes sure to give each character’s unique abilities a proper showcase without having to slow down to underscore that’s what he’s doing. There does seem to be a particular sense of joy when it comes to the Hulk, as well as some glorious physical stunt work by Johansson’s Black Widow and Cobie Smulders’ Agent Maria Hill.

We get the sense that Downey’s Stark is first among equals here, perhaps because, of the main characters, he not only has the biggest arc, but is the most mercurial. His philosophical clashes with Evans’ straight-arrow Steve Rogers (aka Captain America) are wonderful to watch because of their differences, but even more memorable are his scenes of surprised affinity with Ruffalo’s Bruce Banner/Hulk. There’s something genuinely affecting in seeing these two men, used to being misunderstood or not understood at all, finding kindred spirits in the midst of thundering havoc all around.

A note of special appreciation about the Hulk here – not only does Ruffalo give us a man who is in a state of minor exasperation at all times (the better to defuse his rage) and major self-imposed loneliness, but the visual effects department gives us the best iteration of the Hulk since Lou Ferrigno went green. We can still see Ruffalo’s performance within the Hulk, rather than having CGI trying to impose a version of an actor’s face on something that looks like a badly-proportioned videogame avatar (which has been the case with at least one previous iteration of the Hulk).

Hemsworth remains a delight as the slightly befuddled but utterly game Thor and Tom Hiddleston is elegantly wounded as Thor’s spiteful stepbrother Loki. (One caveat – Loki’s horned helmet doesn’t look any less silly than it did in THOR. This bit of costume design does not survive translation to live action well, but Hiddleston bears up under it nobly.) Johansson is coolly capable (and of course looks fantastic) as Natasha Romanov/Black Widow and Renner targets some emotional moments with understated precision. The entire cast is terrific.

The 3D doesn’t distract from the film, although it seems unnecessary – the effects all look like they are satisfyingly dimensional enough without the extra process and it would have been nice to see the kind of colors those dark glasses inevitably tamp down.

In summation, THE AVENGERS will appeal to fans of comic books, fans of action and fans of characterization and dialogue. It’s a pretty awesome assembly.

By the way, sit through the closing credits. Just sayin’.