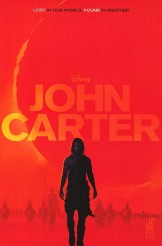 There’s a very fine line in science-fiction/fantasy between playing it straight and lapsing into preposterous solemnity on one side and self-parody on the other. In this adaptation of Edgar Rice Burroughs’ “A Princess of Mars,” director Andrew Stanton and his fellow screenwriters Mark Andrews and Michael Chabon manage to stay expertly on the tightrope and provide us with an entertainment that harks back to the fun of the first STAR WARS, before the fun itself became serious business.

In JOHN CARTER (as the film is called on every poster and listing, though those who sit through the end credits will see a title that reads JOHN CARTER OF MARS), we meet our hero (Taylor Kitsch) as he is making his way to a telegraph office in late nineteenth-century New York, clearly afraid of being followed. Carter’s nephew, a young and naïve Edgar Rice Burroughs (Daryl Sabara), arrives at Carter’s estate to be told his uncle has died. Uncle Jack has left everything to Edgar, but there are some odd conditions.

Flash back to 1881, with Carter, a Confederate veteran of the U.S. Civil War, doggedly seeking a cave full of gold. Carter escapes from U.S. Army custody, actually finds his cave – plus a dying, odd-looking fellow clutching a strange device. Carter happens to pick up the object at the exact wrong moment and finds himself in a desert where he is suddenly able to make vast, weightless leaps. He then encounters a group of Tharks, tall, four-armed warriors whose leader Tars Tarkas (Willem Dafoe in a sterling motion-capture performance) sees advantage in Carter’s wonderful jumping abilities. You’d think the existence of the Tharks would clue Carter in that he’s a long ways from home, but that realization doesn’t kick in until later.

We, however, have been told by the narrator that we’re on Mars, or Barsoom, as the inhabitants call it. Barsoom is being torn apart by war between the nefarious ruler Sab Than (Dominic West) and the kindly, learned citizens of Helium, led by wise Tardos Mors (Ciaran Hinds) and his beautiful scientist daughter Dejah Thoris (Lynn Collins). Sab Than has supernatural help from Matai Shang (Mark Strong), a being who claims to speak for the planet’s goddess. Matai Shang advices Sab Than to demand Dejah’s hand in marriage as a condition of peace. Dejah runs away, desperately in need of help for herself and her people. Hmm …

While JOHN CARTER, both the film and the character, take a bit too long in letting Carter get over his bitterness and start making himself useful in the Martian mayhem, the film does have a surprising sense of both fun and drama. Too often, big sci-fi spectaculars stop for jokes that aren’t funny. Here, the humor serves the plot while also serving the cause of making us laugh without appearing to try too hard. Supporting characters get their due, with Bryan Cranston skillfully steering the opening sections as theU.S. military leader charged with trying to procure Carter’s unwilling services, and James Purefoy as Dejah’s assistant, who must get the rather dense Carter to comprehend an escape plan.

The CGI/motion-capture characters and the live-action actors and landscape all co-exist easily, so that we simply accept they’re all in the same world together. There’s something sweetly familiar-seeming about the style of CGI/motion-capture and character design – again, it’s reminiscent of STAR WARS without overdoing it. The Utah exteriors are reminiscent of the original PLANET OF THE APES, while the interiors are in an aesthetic that encompasses both Burroughs and the works of Frank Frazetta.

Kitsch’s performance is interesting in that he doesn’t overwhelm the film. On the one hand, this is a good thing – one can easily imagine a better-known actor’s star turn upsetting the balance here. However, he ought to register somewhat more strongly than he does. His acting choices are fine, but they seem a little muted in these larger-than-life surroundings.

West and Strong have both done this sort of thing before and continue to do it exceedingly well. Dafoe is delightful, as is Samantha Morton, playing a downtrodden Thark who gets caught up in the proceedings. Michael Giacchino’s musical score tips its hat respectfully to the works of John Barry.

The film is in 3D, which has the virtue of being unobtrusive, but adds absolutely nothing to the experience. Yes, expanses of desert look larger and wider than they would in 2D, but for most, this won’t justify the added expense of a 3D ticket price.

Otherwise, JOHN CARTER has a sense of adventure, a sense of fun and, best of all, a sense of proportion. It’s a family-friendly bet that honors its roots and its audience.