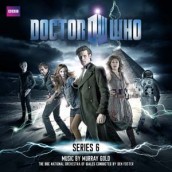 The 6th time continues to charm for WHO composer Murray Gold

The Doctors might change every season or other, but we can be thankful that Murray Gold has been riding the Time Lord’s T.A.R.D.I.S. since his first, revamped regeneration. In the process, the new “Who”’s music has constantly impressed with its sheer, giddy sense of invention and production value, qualities that quickly impressed even a non-acolyte like myself.

DOCTOR WHO: SERIES 6 is no exception, especially with the dynamic playing of BBC’s Nation Orchestral of Wales under the enthusiastic baton of Ben Foster. If there’s any quality that makes this two-CD collection’s numerous suites sound of a piece, then it’s the neo-Bondian approach that Gold gives to the varied adventures, from the fuzz guitar and imposing countdown of “The Impossible Astronaut / Day of the Moon” to the playful military bombast of “Let’s Kill Hitler.”

Quirk also abounds with the twisted fairy tale music of “Night Terrors,” the bizarre country-dulcimer stylings of “The Girl Who Waited” and the cartoonish pizzicato doings of “Closing Time.” But if there’s a true key to Gold’s uniform success with the series, it’s that he can at once have fun with its absurdity while also realizing the emotion that’s now invested in these characters. It’s a moving sense of dramatic grandeur that also inflects even the quirkiest adventure, especially for the climactic “Wedding of the River Song.” As with each Silva Screen DOCTOR WHO compilation, Gold gives neat personal recollections of the musical story arcs on hand in the CD booklet. Each displays a personal connection to the Doctor that epitomizes the fanboy love of the character’s longtime followers- one more reason to hope that the composer never sheds this Gallifreyan’s skin.