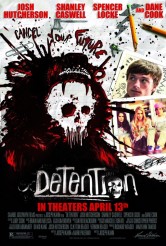 A parody of slasher films, John Hughes and many other genres with more affection than comedic timing

DETENTION is being sold as tongue-in-cheek horror, a la SCREAM. It actually is closer to full-blown parody, with a multitude of filmic targets from the Eighties and Nineties. It is unclear who exactly this is made for, because the people who grew up with the movies referenced here have now seen other parodies, while modern real-life high school students tend to have more recent pop culture frames of reference. As to the kids in DETENTION, they are all surprisingly attuned to trends that predate their births.

All of this suggests the script for DETENTION, by Mark Palermo and director Joseph Kahn, may have predated its production by a good while. Theoretically, this could still work. However, while events have been thought out, we’re not engaged enough by the facetious storyline to be swept up in it, and most of the jokes don’t hit home hard enough to produce actual laughs.

Grizzly Lake High School is the normal hive of adolescent pain, longing and ambition. When a bitchy head cheerleader is murdered, unhappy loner Riley Jones (Shanley Caswell) tries to kill herself. The cheerleader’s murderer, dressed as Cinderhella (the villain of the film within the film), tries to murder Riley and inadvertently winds up saving her instead. Riley goes to the police, who of course don’t believe her, but soon enough corpses (and general weird stuff) have piled up to make Riley’s classmates believe her. This includes skateboarding class heartthrob/academic failure Clapton Davis (Josh Hutcherson).

DETENTION references THE BREAKFAST CLUB, THE FLY, BACK TO THE FUTURE, Patrick Swayze and Pat Morita, among many other mainstream cultural touchstones of yore, but the jokes here aren’t specific enough or set up properly to score with any frequency. The gore isn’t exactly pervasive, and it’s deliberately fake-looking, but it spurts on cue, adding another element that doesn’t mix well with the rest of what’s here.

One saving grace is the performance of Caswell as snarky, resigned, observant and fairly well-written heroine Riley. Riley may actually mention MY SO-CALLED LIFE, but the homage works within this context. Riley as a character has a through-line and Caswell honors it by playing it straight and with earnest grouchiness. Hutcherson is agreeable as Clapton, a nice guy coping with a lot of information that doesn’t make sense.

DETENTION is ambitious and its nostalgia is sincere, but it doesn’t have the comedic invention or the narrative urgency to work as either spoof or slasher.