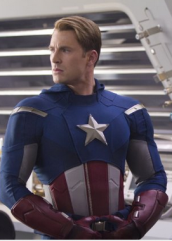 The actor talks playing it straight and selfless as Captain America

THE AVENGERS isn’t Chris Evans first time out as Steve Rogers, aka, Captain America – he donned the red, white and blue outfit for the 2011 CAPTAIN AMERICA movie, set during WWII. For that matter, Cap isn’t even Evans’ first Marvel superhero character – he previously played Johnny Storm, aka the Human Torch, in 2005’s FANTASTIC FOUR and its 2007 sequel, FANTASTIC FOUR: RISE OF THE SILVER SURFER.

However, a few elements set Steve Rogers/Cap apart from other characters Evans has portrayed. For one thing, Rogers got frozen in the Forties and woke up in the present. The modern world to him is strange, new and virtually alien. What makes him really stand out to Evans, though, is that instead of the sarcastic types the actor usually plays, armed with snappy comebacks as well as great fight moves, Captain America is sincere, pure and cracks few jokes compared with his AVENGERS compadres.

On being the straight man among the wisecracking superheroes, Evans says, “That’s his role. It’s necessary. And that’s kind of why I love it, because I am used to kind of leading on, cracking jokes and being a wiseass. So it’s nice to kind of play it straight and I think in this film, even more than the first CAPTAIN AMERICA, Steve Rogers has some issues, some conflicts – he is a man out of time. But given who he is, his nature, he puts his mission first, his selflessness.”

Although Rogers has been genetically altered to be a super-soldier, he still has fewer superpowers than most of the other Avengers, something Evans is quick to acknowledge. “Yeah, I’m like, ‘Hulk, you do this impossible thing. Thor, you bottleneck a portal, and Iron Man, you fly overhead. I’ll take the stairs,’” he laughs.

Is there a different Avenger Evans would like to play? The actor says he loves the way Iron Man is written, but at the same time, Evans loves Robert Downey Jr. in the role far too much to want to replace him. ”I want to say Iron Man, because I love those movies, but I can’t – the shoes would be too big to fill.”

Working with Downey was one of the highlights of THE AVENGERS for Evans. ”I think that Downey’s so good with improv and working off the cuff, and he’s never going to do the same thing twice. So you’ve got to be on your toes, but he just is a natural – he’s just funny. He’s always funny. He brings a certain life to the scene. Even if you’re not the one making jokes, you can appreciate what he brings to any scene in terms of comedy.”

Chris Hemsworth, who plays Thor, recalls that when AVENGERS was filming on location, Evans got all of his fellow performers together at a local bar by texting “Avengers Assemble” with the address and time.”

Reminded of this, Evans laughs. “We paid for it at work the next day.”

What is Evans’ favorite aspect of CaptainAmerica?  “I’ll say his heart, his selflessness. He wasn’t born a superhero, this didn’t happen by accident – he was chosen, and it was for those reasons, values and morals. He puts other people, other causes, ahead of himself, and it’s something to aspire to.”

Evans describes what he found most memorable during the filming of THE AVENGERS. “I think it’s the scene where Thor and Iron Man are fighting. I had just seen THOR the day prior, and I had yet to see Hemsworth orDowney in their full suit and I showed up that night and the first time I saw them both geared up, I got very excited, like a little kid. I was just honored to be part of it.”