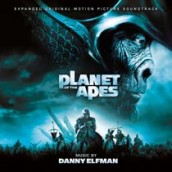 Danny Elfman has often played primal aggressiveness for director Tim Burton in such rampaging scores as SLEEPY HOLLOW and MARS ATTACKS. But none of their collaborations would grab the composer’s furious instincts like Burton’s redo for PLANET OF THE APES.

Sure Jerry Goldsmith had the percussive idea first when he accompanied Charlton Heston into The Forbidden Zone, but leave it to Danny Elfman to run rampant with those animalistic beats and ethnic wind instruments. While the orchestra is ever present here, it’s a swirling, unbound beast, with anything resembling pleasant melody hosed down in a cage until the climax. Grinding, pounding, screaming brass is the thrust of this APE score, an approach that definitely makes this at times near-dissonant PLANET soundtrack its own, assaultive animal in the franchise’s cannon, and the one that arguably best conveys the most nightmarish aspects of a future man never reckoned on making.

Die-hard Elfman fans will certainly dig the relentlessness of it all, with plenty of chest-beating to go around over three discs in this deluxe La La Land set that captures the complete score, its alternates, and the original 2001 album presentation, with some ape easy listening music to spare. But even that weirdly intoxicating percussion is anything but pleasant to captive human ears in this massive, strikingly savage collection of notes that’s pure Elfman unbound.

Click on Link: To Purchase the PLANET OF THE APES  soundtrack