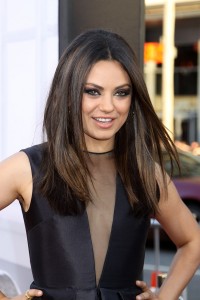 Having an annoying roommate is one thing. Having that roommate that’s also your childhood teddy bear is a whole other thing — especially when it’s a living, breathing thing that likes the ladies and enjoys drugs.

That’s the set-up for the new Seth MacFarlane comedy TED which features Mark Wahlberg as John Bennett who made a wish as a kid that has haunted him as an adult and Mila Kumis as Lori Collins, his somewhat understanding girlfriend.

Doing TED was a no brainer for Kunis, since she currently voices the role of Meg Griffin on the Seth MacFarlane created FAMILY GUY – so everything was all in the family.

Here’s what Kunis had to say about her latest role and more.

How did you choose this project?
MILA KUNIS: Well, I knew about the project in my mid ‘20s when I was like 24, MacFarlane told me about it, brought it up to me to help him cast it, like “which girls do you think would be appropriate for it, they need to be like late 20s, early 30s.”  I went through a list of different girls and over the years the script would change, and he was like, “what about this girl?” And I was like, “yeah, she’d be great, what about this girl?”  And then ultimately, by the time the script was ready to go into production, I was old, [laughter] and he was like, “you do it!” And I said “okay.”

So you didn’t have to audition for it?
KUNIS: No. 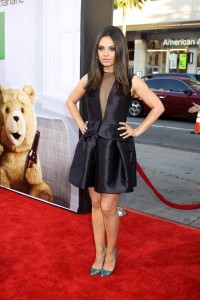 Are you at a point where people bring you scripts because they want you in it?
KUNIS: You always get scripts, it doesn’t mean they are good. Just because somebody gives you something doesn’t mean it’s something you should take. I was offered scripts off of [THAT] ‘70s [SHOW] instantly, but it didn’t mean that they were good.  I’m a firm believer in that you fight for what you want, and if a great script gets handed to you, oh my God, consider yourself that much luckier.  But I fought for everything and I don’t plan on stop fighting, I didn’t have to audition for this, but that doesn’t mean I don’t have to audition for the next project.

How was it working with Mark Wahlberg?
KUNIS: I love Mark. Mark and I have done three movies together, this is the second time we have played opposite against each other. He’s a dear friend. I adore Mark, we have a good time together, we laugh, I’ve known him for four years, from whenever we did MAX PAYNE.

He said in this one, you had an even better relationship than MAX PAYNE.
KUNIS: We finally got to do stuff together, it was great.  I would work with Mark tomorrow.  I love him, I think he’s fantastic.  Here’s the thing, you get to a place where you don’t have to work for the sake of working, so you get to pick the projects you want to do.  And you work with the people you want to work with.  And so, I had a great time working with him once, I worked with him the second time, I had a fantastic time the second time, so why not give yourself the opportunity to work with people you like? It’s a gift.

How was it acting opposite something that wasn’t there [Ted is a CGI creation]?
KUNIS: Mark had it rough, I didn’t.  If you see the film, you know, Mark has to fight and be physical with the bear, I don’t do these things.  I have conversations with the bear, I walk next to the bear, but I don’t necessarily have a physical interaction with the bear, so I had it easy.  You also have an earwig in your ear, Mark had one in his, and Seth always spoke to us as the bear.  So you have the voice in your head at all times. [laughs]

You’ve done a lot of comedies, so how did you career change after you did BLACK SWAN?
KUNIS: People keep asking me that because I think they want me to tell them how it changed.  I don’t know how it changed.  I think it changed for everybody else, it didn’t change for me.  I think people were like, “oh wait, she could do things other than comedy.” That’s what changed. It was everybody else’s perception as to what I am capable of doing, and my only response to that is an actress is an actress is an actress is an actress.  Everybody is capable of doing anything if given the opportunity. And I was lucky enough to be given the opportunity, and then everybody went “oh, it didn’t do anything for me, it obviously did something for you.” Cause for me, it was a job and I was proud of it and I moved on past that.  I loved it and I loved the fact that people loved the movie and I loved the fact that people responded to the movie, but it didn’t change anything about me.

Do you feel like you’re under scrutiny for being a certain weight or wearing certain clothes all the time?
KUNIS: I’m sure I’m under enough, I don’t go on line and I don’t need to feel worse about myself than I do being a woman to begin with, so why help that by going on line and reading blogs that doesn’t matter to me. If I’m happy and comfortable, I’m happy and comfortable. I’m sure that if I was somehow veering off to the left or the right that’s not good … somebody would tell me, I trust the people around me. If I started looking obese and being unhealthy, I would hope somebody would inform me of it. If I had on polka dot pants and a striped shirt and looked like a clown, I would hope somebody would be like “oh, check yourself in the mirror.”  But ultimately, so long as I’m happy, I don’t need somebody else to tell me that I’m not.

Can you talk a little bit about being the new face of Dior, like how that came about and what it means to you?
KUNIS: They offered me to be part of Dior and I said yeah.  I took a long time to not do a campaign because I wanted to do it right and I wanted to do it for a company that I believed in class and style, I didn’t want to do anything for the sake of doing it, cause I didn’t have to.  And so I like the company, I like the people with the company, I like the group, I liked everybody, so I said “yeah.”